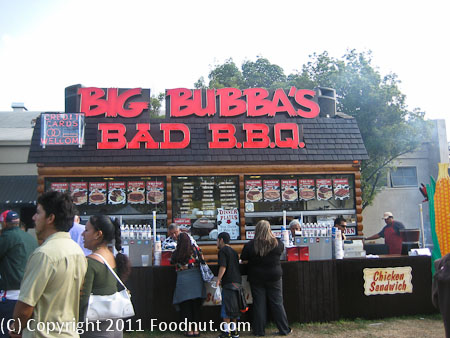 Big Bubbas Bad BBQ is a food concession that appears at some of the country’s largest State Fairs, Nascar Races, and Livestock Shows since 1996. You will find them in California, Colorado, and New Mexico. We have eaten their food several times over the years and found it to be pretty good. Our last visit in 2013 was during the Maker’s Faire in San Mateo.

The best time to order is in the middle of the day, when there is a line. Towards the end of the day, they wind down the BBQ’ing so food quality falls off.

Decor, Vibe – Big Bubbas Bad BBQ has a huge smoker with tons of meat cooking. Corn was grilling on a separate grill. Long lines most of the time. Lots of families chowing down on fair grub. They use Lazzari Natural Mesquite Lump Charcoal. 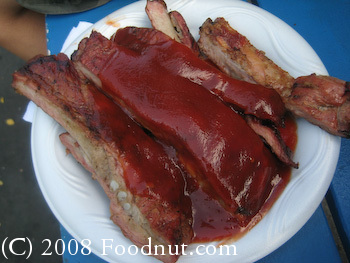 Pork Spare Ribs ($9, $13 for a dinner plate) were great. Lots of tender meat and very good BBQ sauce. Tangy, sweet, and zesty sauce. Messy but delicious. Forget about the dinner with 4 ribs, average cole slaw and just forgettable beans. Our recommendation is to stick to the pure ribs. 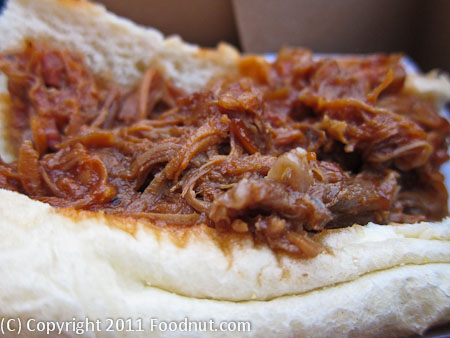 Pulled pork sandwich ($9) was smothered in their barbecue sauce and featured lots of tender flavorful smoked pork. Their bun was pretty average.

Corn on the Cob ($4) was fresh and cooked well. Not too much butter surprisingly!

OK:
Tri Tip dinner plate ($13) was average, had to slosh on the BBQ sauce to make it reasonably acceptable.

Pans:
Smoked Turkey Leg ($9) makes you look like Fred Flintstone. Huge but very salty and not very tender meat. Cover it in BBQ sauce to make it passable.

Big Bubbas Bad BBQ serves up a quick fixing of good pork BBQ ribs that is surprisingly decent. Service is about as much as you can expect from minimum wage workers toiling in the hot sun. Avoid several of their non-rib items. Look for Big Bubba’s bad BBQ at the next county fair. The ribs are almost on par with Memphis Minnes. They have restaurant locations in Paso Robles, Visalia, Atascadero, and Merced, but reviews on Yelp do not look good.