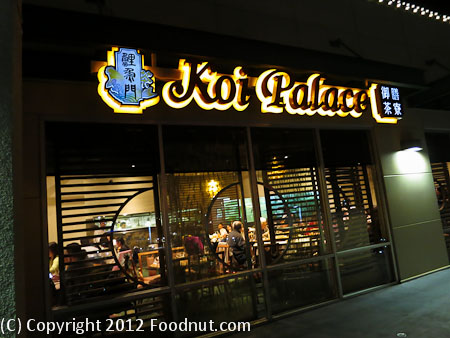 Why did we dine here? – Koi Garden also known as Koi Palace at Dublin is the East Bay outpost for Koi Palace, arguably the best Chinese restaurant in the San Francisco Bay Area. We were in the area and had to give this Chinese restaurant a try. This restaurant is located in an Asian-focused strip mall. They also run Just Koi downstairs, a casual Chinese noodle restaurant.

The decor in Koi Garden is clean, modern, with lots of carved wood. Far nicer than most Chinese restaurants.

Insider Tip – Make reservations as this place is not large.

Service – Koi Garden had reasonable service with plate changes and refills occurring fairly often. The busboys were a bit aggressive in taking away items.

Verdict – Koi Garden serves up some of the best Chinese food in this area. We have no reservations recommending this restaurant to those looking for classic Chinese food. There is no doubt that this place has decent dim sum at lunch time and is pretty crowded too.
Other solid Chinese restaurants in the San Francisco Bay Area include: Koi Palace, Daly City, The Kitchen, Millbrae, and Asian Pearl, Richmond, CA.

Snake soup ($15.00 per cup) is good for colder evenings. This described the environment outside! Lots of very good ingredients, good sized bowl, and enough for two. Snake tastes like chicken, doesn’t it?

Coffee Spare Ribs ($16.00) were excellent. Nice coffee flavors combined with a bit sweetness and a wonderful crust. A must get. We noticed that they have coffee crab, guess what we’re going to order next time. 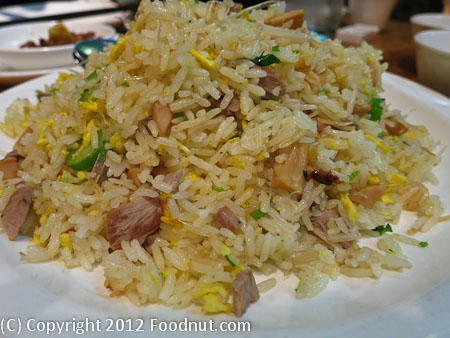 Boss Fried Rice ($18.00) consisted of egg, BBQ Pork, and what we think is Sharks fin. We wouldn’t have ordered it if we knew that was the case. In the end, it was a solid fried rice.

Complimentary red bean soup dessert if you ask for it.

OK: (Order if you like this dish)
Shanghai dumplings ($9.00 for six) were cooked in tiny tinfoil containers so the soup would not leak out. The soup was all over the place although flavors and textures were fair. This dish not at all authentic, no surprise as this is not a Shanghai Chinese restaurant.

Combo Red bean shaved Ice with Grass Jelly ($3.75) had mushy beans and was average at best.