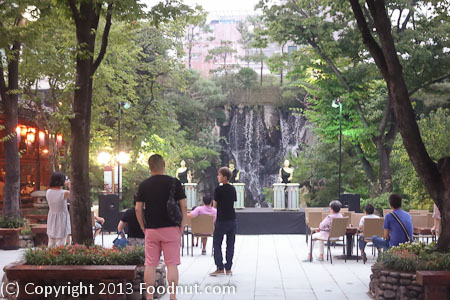 Why did we dine here? – Samwon Garden is a long standing Korean BBQ restaurant in Seoul. It opened in 1976 and serves traditional Korean dishes with an emphasis on BBQ. We had to try a restaurant like this to see what authentic Korean BBQ is. We asked a leading Seoul food blogger which of the famous high end joints we should dine at and he recommended Samwon Garden.

This restaurant is very large, with several dining areas as well as an outside courtyard where a drum performance was staged. The air inside Samwon Garden reminded us of several Korean restaurants in the San Francisco Bay Area, smokey with limited venting. 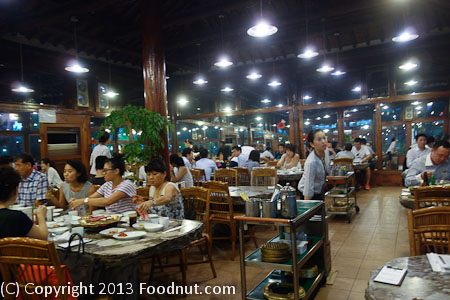 Service – Samwon Garden had fair service, we expected a lot more. There were long pauses and they really didn’t come around to check on you very much.
Verdict – Samwon Garden satisfied our need to dine at a traditional Korean BBQ restaurant. While we were not impressed by some of the food, it was a good experience nonetheless. In the future, we would probably try less expensive Korean BBQ restaurants. Diners can easily spend US$100 per person unless they are very careful like we were.

Samwon Garden Signature Dishes – Beef Short Ribs, Rib Soup, Fresh Rib Eye. They also have soup and noodle options, which are a must if you want to fill up on a reasonable check. 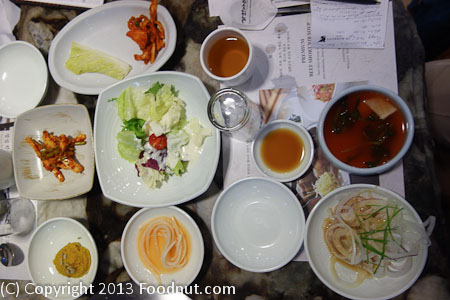 160g Marinated Beef Short Rib (W39,000) cost almost US$35 for a tiny portion of their beef. We had to order this small dish. They cooked it for us, on our table utilizing nice red hot coals. The marinade made the meat fairly sweet and we found the beef quality, average at best. We have to say that we’ve had better Korean BBQ at home. 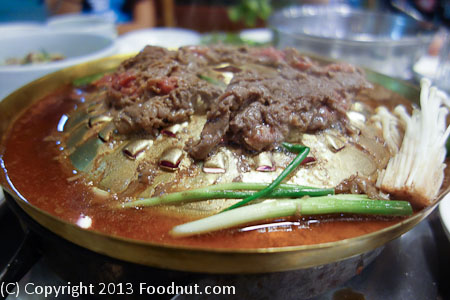 200g Fresh Marinated Sliced Rib Eye (W39000) was a nice variation from all the other meats that they had. This dish came with shitake mushrooms, green onion, and was also freshly grilled in front of us. The waitresses did a good job switching the grilling surface multiple times. The juices dribbling off the meat went well with rice. 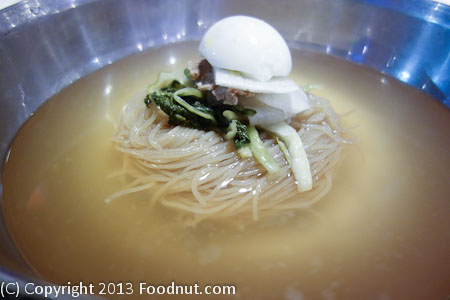 Cold Buckwheat Noodle (W11000) was a huge bowl of homemade noodles in a robust beefy broth, topped with half an egg, and some vegetables. With all the BBQ beef costing so much, you really need to order dishes like this.