Dumplings worth flying across the Pacific Ocean for… 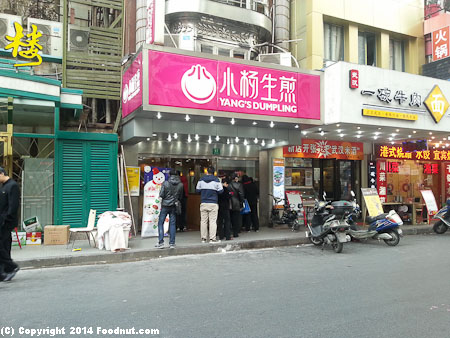 Yang’s Dumpling – Chinese name: 小杨生煎馆 or xiao yang sheng jian guan – is a small but popular fried dumpling shop serving pan fried pork bun or Sheng jian bao, a Shanghainese Chinese dish. It was formed in Shanghai in 1994 by Mrs. Yang, who still keeps her recipe secret. They have over 20 locations in Shanghai and are opening another more all the time. We dined at the closest location to our hotel near People’s Square.

Yang’s had a line when we went there, as is the case most of the time because the dumplings are cooked in batches. Our first visit was in 2010, our latest at the beginning of 2015. In 2015 we also made a pilgrimage to Da Chun, which has been serving authentic Sheng Jian Bao since the 1950’s. 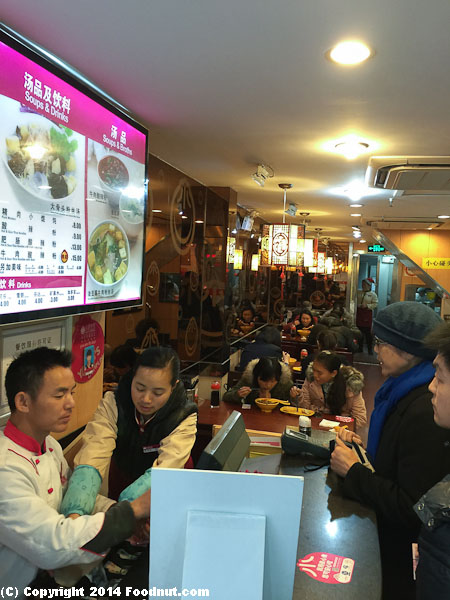 In 2015 we notice that they really upgraded the interior. It was pretty plain before, now it looks decent. (Unlike the unchanged Jia Jia across the street) When we think about Shanghai, this is one of the first restaurants we start to drool over! They are that great. This Yang’s Dumpling location is a great place to visit, because across the street is one of the best Shanghai steamed dumpling or Xiao long bao restaurants; Jia Jia Tang Bao, so do not eat too much at any one place. Yang’s is one of those MUST visit hole in the wall places.

How they cook Yang’s Dumplings 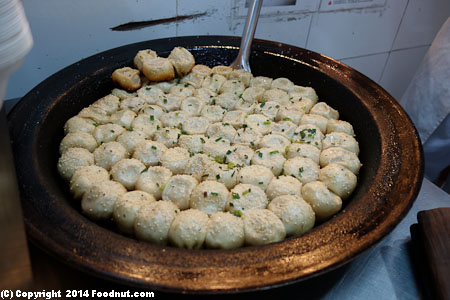 Decor, Vibe – This location of Yang’s Dumpling has good decor, air conditioning, and was fairly clean. Labor is cheap in China, someone was always watching and cleaning up. A different location in a shopping mall was newer and even nicer. Yang’s was full of locals getting their breakfast dumpling and noodle fix. Lots of to go orders. 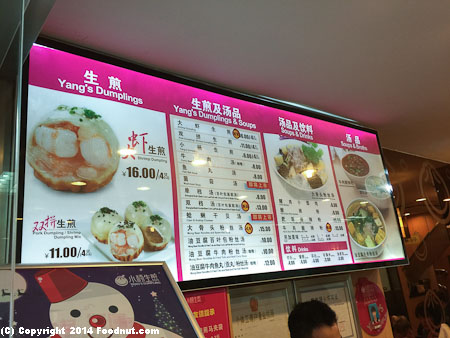 Yang’s added to their menu in 2015. They have shrimp dumplings, pork/shrimp combo dumplings too. They have several soups & broths and now sell drinks. 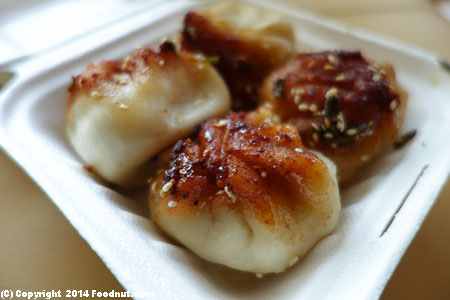 Inside of Fried Dumpling

Yang’s Dumpling or Sheng jian bao (6¥ for 4) are crunchy on top and filled with pipping hot and delicious soup. These are so big and hot, you need to wait for them to cool down. Take a small bite and suck the massive amounts of soup out slowly, before proceeding. The wrapper is thin but chewy and thicker on top, so these dumplings do not get soggy when dipped in their special vinegar soy sauce dip. Each bit gets some soft texture along with a bit of the crunch. Yang’s has a big bundle of finely chopped pork inside. Sesame seeds top off the surface. These are cooked in a huge cast iron skillet. 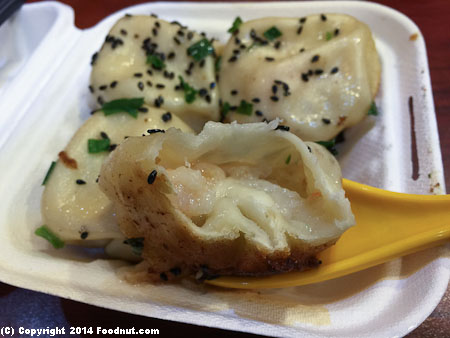 Shrimp Dumpling (16¥ for 4) We had to try the new version. These bad boys are good, but we still prefer the original. They are so hot, we burnt our tongue. Be careful. 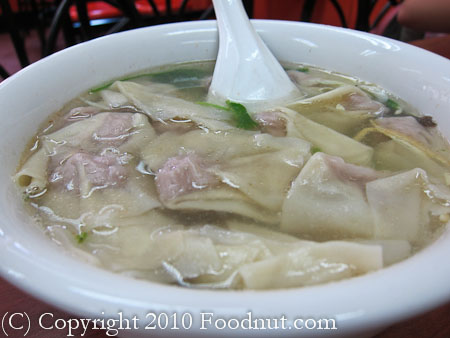 Pork Wonton (8¥) had small and tender wontons, but lots of them. Broth was on the salty side. Hey, we are here for the dumplings. 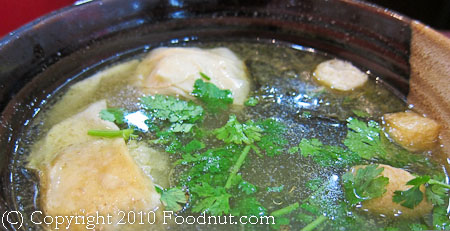 Tofu Puff with Vermicelli Soup (10¥) had 2 large tofu balls with some firm pork inside. Lots of clear vermicelli noodles in a piping hot chicken flavored broth. 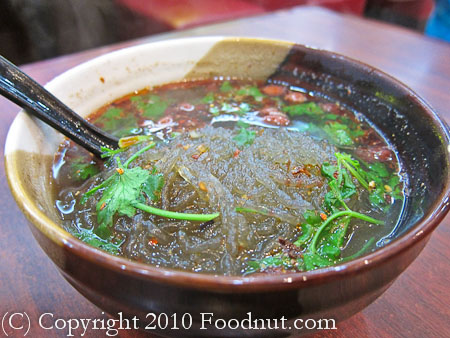 Hot and sour rice Noodles (9¥) had a very spicy broth that is hard to drink, but the noodle were tender and good.

Service – At Yang’s you order in one line, and wait in another line for the next batch of dumplings. Noodles are delivered to your table.

Value – Incredibly cheap and tasty. Great for breakfast, lunch, or a snack before your flight. You could order everything on the menu and pay less for lunch in the US.

Verdict – Yang’s Dumpling makes the best pan fried pork buns we have ever had. We have eaten here every time we visit Shanghai. Someone needs to replicate them in the USA. Shanghai Flavor Shop in Sunnyvale is the best we have, but not very close to Yang’s Fry Dumpling quality.  There just isn’t the volume here to create them fresh. 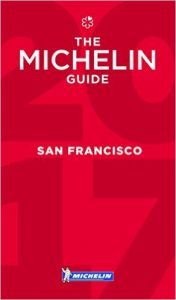 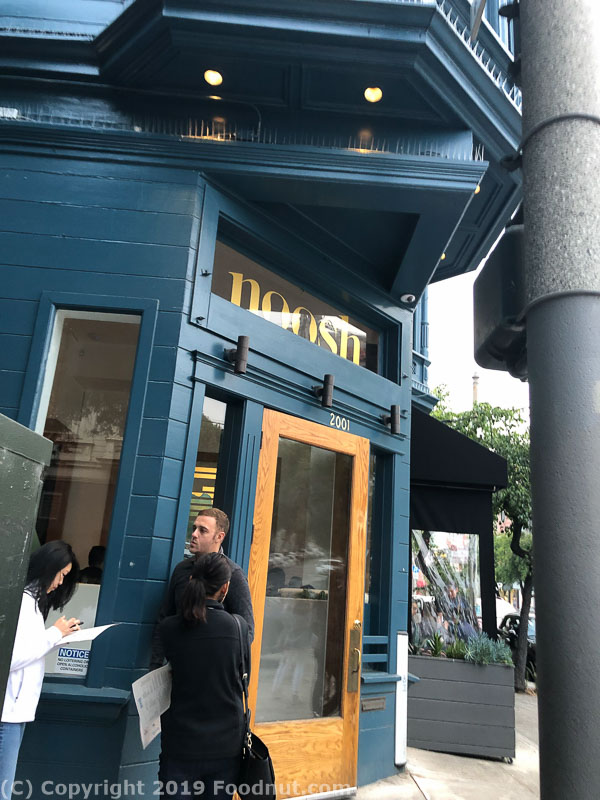