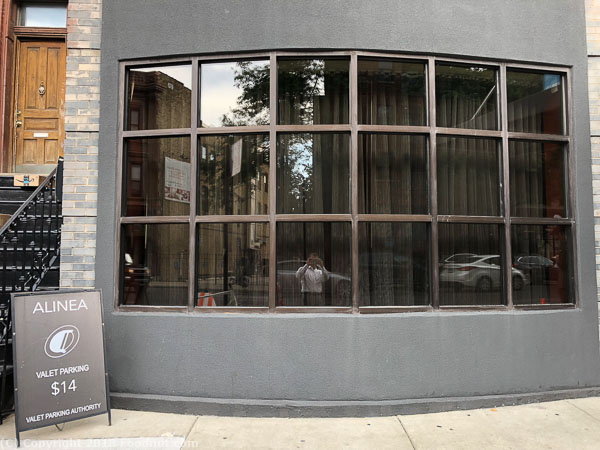 Why did we dine here? – Finally a chance to dine here! Alinea is a legendary three Michelin star restaurant in Chicago. It has four times been named the Best Restaurant in America and is one of only 13 restaurants in the U.S. to earn the coveted Michelin 3-Star rating. This is Chicago’s only 3 star restaurant. 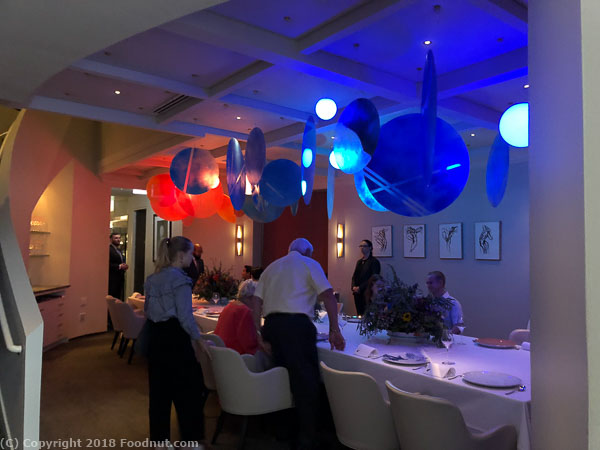 Chef/owner Grant Achatz has been listed in the World’s Top 50 restaurants for his innovative molecular cuisine. (#34 in 2018) They remodeled completely in 2016.

You need to book ahead and prepay your reservation on tock. You can select from:

Beverage pairings are available for purchase at an additional cost.

Dress code is smart casual. No ripped jeans, t-shirts, ball caps, hats or tennis shoes. Jackets are not required, though many guests do opt to wear them. Most of the folks were in the 40-60 range.

Next was running retrospectives in Alinea cuisine from the 2005-2010 menu. Soon they will switch to a newer range.

Insider Tip – Make reservations exactly to the day/hour they say. They typically release bookings on the 15th of the month, two months in advance.

Service – Alinea had stellar service. No need was not met or anticipated. Only one minor glitch occurred. They clearly know what they are doing and do not overly watch you.
Verdict – Alinea had a lot of hype to live up to. Yes it was an amazing experience, one that every card carrying foodie should do.

After ‘eating’ we wondered what we ate that was ‘real and solid’. Perhaps just the squab and octopus. It was much more interesting journey with theatrics, and less gimmicky than Fat Duck in the UK. After 10 courses, we had a good ideas of what they do, no need to spend more. Clearly the food was not the focus, and much of it was more interesting than great.

Having going through this, we would check it off the bucket list and move on. Remember its the journey, not the destination.

Alinea’s Menu changes all the time especially with the seasons. The waiter said from week to week you might see 1 or 2 subtle changes. They are great at accommodating dietary restrictions and allergies. After you are seated, you get a fun find a word card that you can find ingredients on. At the end of the meal, you get a printed menu.

A basket of oranges decorated the table – We peeled one and started eating it. Later a server said they were to be used later in the meal.. oops.

One of the dishes was opened at the table and smoke started coming out. The dish was well done and a mix of flavors, topped with the caviar. The iceberg lettuce was hard to eat but provided a crisp texture to the gelatinous avocado and herbs.

Liquid nitrogen was poured into the bowl of oranges. The ensuing cloud enveloped our table.

The warm dish housed a crisp leaf that we were to stick a spoon through and pull out the goodness down below. Nice curry flavor with crispy bits in every bite.

Off to the side were little balls filled with spiced orange juice (clove). Stick it in your mouth, and let it squirt all over your mount.

The tender Octopus had some strong BBQ sauce on it. Some dehydrated lime was put on top.

Soft artichoke bites were hidden in the rocks on the plate. Hard to find them as they were well camouflaged.

4) The entire room headed downstairs to the kitchen and were treated with watching them create a cocktail using a really old cocktail shaker. Very cool. The kitchen was also very clean and busy. They don’t serve cocktails upstairs, so this is special!

The drink was good and strong with hidden potency. They also gave us a pizza nugget, very cool.

You are given chopsticks to eat this Asian influenced dish. The scallop dumplings are placed on top of lavender and heated on the fire pot.

‘Noodles’ are rehydrated in the bouillabaisse that has lots of tomato flavor.

The log is a crispy seaweed creation filled with carrot. The gooey middle contrasts with the crunchy outside.

The dumplings are very soft and chewy and do not seem like a scallop.

A cool make a clam chowder at the table dish. The potato was hidden away and cooked under the fire pit. The waiter mixed all the ingredients together while we watched.
The included hot sauce was not very spicy, 2 out of 10. The results were a bit salty. Cool to watch at least.

The squab was warmed with the coal on top of it. It was overwhelmed with the sauce. The beef jerky was really small with slight vanilla flavor. The beet had a nice sweet mustard under it.

Nitro’d tomato with lots of horseradish flavor with a nice peach soup underneath. The heavy puff had some savory mascarpone next to it.

The fun test tube palate cleaner was meant to be drunken in one swoop. This tasted like a boba drink with jelly.

A banana looking dessert that was had a white chocolate shell and was filled with a dark chocolate ganache. On the side was a distilled cherry drink meant to be intermixed with the chocolate. Pretty cool.

10) We were celebrating a birthday, so they gave us their distilled Betty crocker cake with champagne. Very cool but weird to drink a cake. Not even a cake is normal!

11) We finished off the meal with balloons of green apple. You need to take your glasses off before ‘sucking’ down this cool petit four.