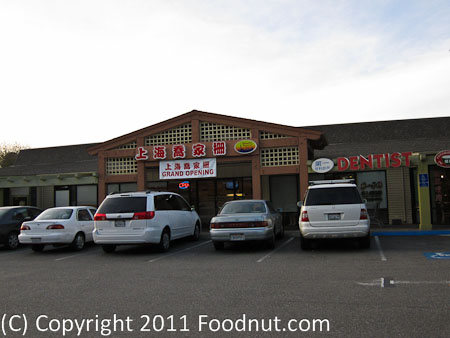 Shanghai Restaurant is a Shanghainese Chinese Restaurant in the Cupertino village shopping center, replacing the popular HC Dumpling restaurant. They have the usual Chinese dishes along with a fair amount of Traditional Shanghai dishes not served in most restaurants. Our last visit was December 2012.

Check out the review of Jade Garden in China to see what real Shanghainese places serve. Another must visit restaurant in Shanghai, China is Fu1039.

Decor, Vibe – Typical Chinese restaurant with nondescript tables and chairs, and a smattering of old Shanghai themed pictures on the wall. Waiters were racing around. Lots of Asian families as well as a good amount of non Asians were dining.

Shanghai Restaurant Menu includes a wide variety of Shanghainese Chinese dishes, everything from dim sum to seafood to Clay pots. They have lunch specials during weekdays.

Signature dish Xiao Long Bao ($7.50 for 6) were hot out of the steamer and had a good wrapper and lots of hot soup inside. Meat filling was plentiful and good. One of the best versions around here. They explained that the dumplings are made as orders come in, making for a superior product.

Pan Fried Pork Buns ($6.95) were 6 steaming hot ones.  Nice crisp bottom and lots of soup inside.  Not the best but passable. 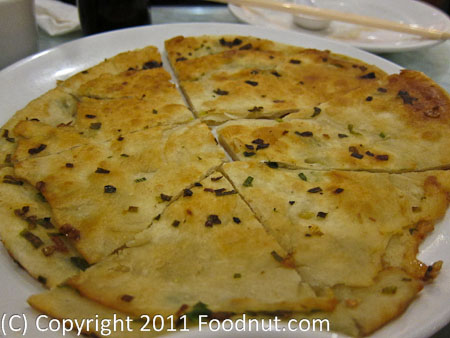 Green Onion Pancake ($5.95) was a bit pale but proved to be a solid version.

Crispy fish fillet with moss ($10.95) is a funny name for a fried fish dish, but the freshly fried and Golden Brown fish were excellent. The moss is more like a type of seaweed.

Shanghai salted and fresh pork soup and Clay pot ($12.95 for medium) was a long boiled soup with lots of fat floating on top. Bamboo shoots, tender pieces of pork, and pork ribs filled the interior. The salted pork help define the broths flavor, which was meaty beyond belief.

Stir fried rice cakes with Ji Zhai ($7.95) were solid version of the classic dish. They were covered with a lot more vegetables than most versions, and had some pale looking Rice cakes that were less sticky than most. Some fresh bamboo shoots rounded out the dish.

Rice Pudding ($3) were freshly made and cooked just right.

Service – Shanghai Restaurant served us the food quickly and provided us better service than most Chinese restaurants. They cheerfully described various dishes and provided us suggestions.

Value – Prices were pretty typical for this type of establishment, although cheaper places exist.

Verdict – Shanghai restaurant is one of the better Shanghainese Chinese restaurants in the Bay Area and surprised us with its very good food. We would definitely like to come back to try some of the more exotic items on the menu.