Chicken Rice is a legendary dish at Singapore’s food hawker centers. It consists of chicken cooked in pork and chicken stock, rice with chicken stock, and some vegetables. Dipping sauce is usually a hot chili dip or soy sauce with ginger. Occasionally they throw in a bowl of soup. We read several articles that state that this is the number 1 thing many people miss when they leave Singapore. Chicken Rice is a National dish for Singapore.

We arrive skeptics, but left believers.

Hainanese Chicken Rice was born in China but migrated to Southeast Asia. We’ve had it many places in our home San Francisco Bay Area as well as the ‘real deal’ on Hainan Island, Sanya, China. (An incredible coconut sauce version)

We got hooked on Chicken Rice and proceed to try it every chance we had. 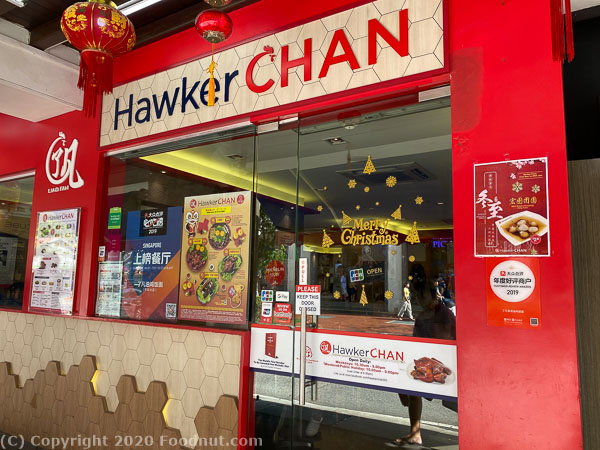 Liao Fan Hawker Chan is notorious as being the cheapest One Michelin star restaurant in the world.  It is located in Singapore and has several restaurant locations. The Chinatown restaurant is clean and modern. We were skeptical and tried this restaurant in late 2019.  They serve soya sauce chicken as apposed to traditional Hainan style chicken most spots have. 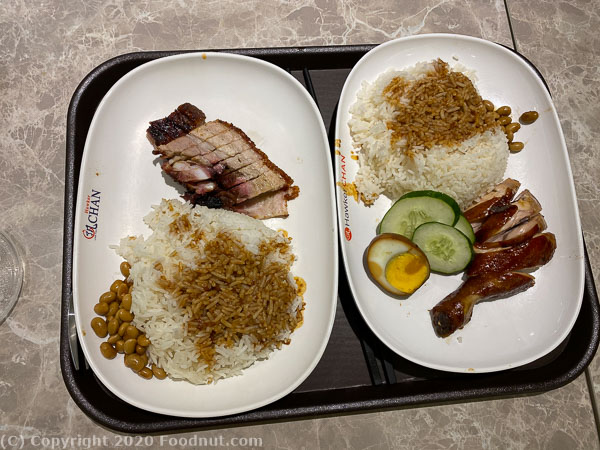 Soya Sauce Chicken Rice (SG$5) blew our mind.  The chicken was actually fantastic.  Very tender and flavorful.  Ridiculously low quantity though.  We could have eaten 3x the portion.  The rice had simple soya sauce dripped on it. 9/10

Roasted Pork Rice ($5.50) was ok.  Also limited quantity. Nice crispy skin, but nothing amazing like the versions in Hong Kong. 7/10 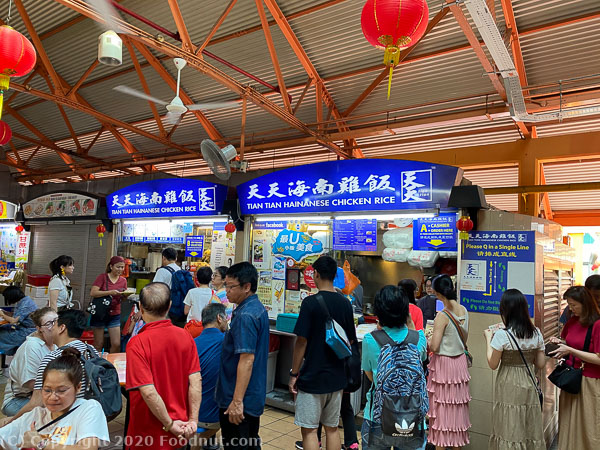 They serve traditional style Chicken Rice that is Michelin Bib Gourmand rated.  The place had a huge long line in 2019 and is well known to all.  It started way back in 1987.

Chicken Rice Set (Medium size SG$5) was a reasonable size. The chicken has a sauce poured on top of it.  The chicken was very tender and pristine.  The rice had sauce on it, something it really did not need.  A local sitting at our table ordered a plate of chicken and separate plate of chicken rice, preventing over saucing.  This is definitely good stuff but not overly amazing like the lines indicate.  No wow like Liao Fan.

Vegetables in oil ($4) baby bock choy topped with shallots, were a big oily but ok.

Ah Tai Hainanese Chicken Rice is located in Chinatown’s legendary Maxwell Food Centre. It was easy to find as it was one of a few to have a line.  A challenger overlooked by many going to nearby Tian Tian.
This dish was stellar here. Perfectly tender and flavorful chicken and fragrant rice. Dirty Cheap too at SG$2.50 = US$2.
Rival Tian Tian Hainanese Chicken Rice is nearby.

Killiney Kopitiam was founded in 1919 and has locations all over Singapore. They are best known for their coffee, Kaya tea and toast.
We encountered them at the Singapore Changi Airport T1, T2 or T3 and needed to try their Chicken Rice. All we can say is that it was also divine and only cost SG$5.61,
Tender chicken and exquisite flavored rice, that we could not get enough of, so that we ordered a second one. Their Milk Tea or Teh SG$1.22, SG$1.68 for hot or iced, is also stellar, not too sweet. If you transit or visit Singapore, be sure to give Killiney a try.

Another nice food court featuring local Hawker favorites. Curry place has really good Nasi Lemak that can use more rice. (SG$7.90)
Chicken Rice from Bugis Street (SG$6.50) was almost as good as Ah Tai. Price is high here and soup is fair. The small portion of Chicken was excellent yet the rice didn’t possess an abundance of flavor.

Changi is consistency ranked as the best airport in the world. On our last visit in 2019 we went to the Food Emporium in Terminal 4 on Level 2M public area.  Its a great food court with virtually any food you could want.

The Chicken Rice spot had pretty good chicken with rice flavored with soy sauce.  Not great but decent.  7.5/10

It’s great that a theme park has a Hawker area to complement the requisite fast food. The Chicken Rice (SG$4.50) was just ok here. A bit weak compared to the other versions elsewhere. Interesting looking Rice Balls.

Sergeant has 6 locations in Singapore. This one is located in the Food Republic food court of the ION Orchard shopping center. There are 22 food stalls here. They serve Chicken Rice for SG$4.50. A solid version. Their rice grains are pre-fried in chicken fat before being cooked in chicken broth. The chicken is steamed only so much, to retain some pinkness.

This food stall was in the large and nice Lau Pa Sat hawker center, not far from Chinatown.  We tried this spot in December 2019.  It was one of the few spots open early in the morning.

Steamed Chicken Rice (SG$4.50) had really nice rice with lots of flavor.  The chicken was good but not as stellar as the rice. 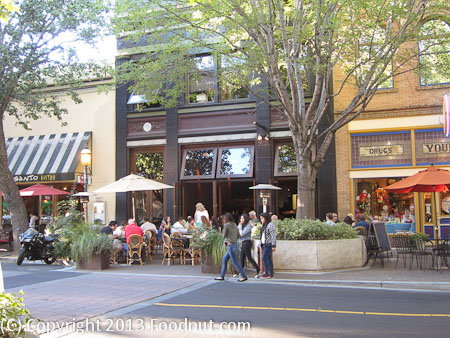 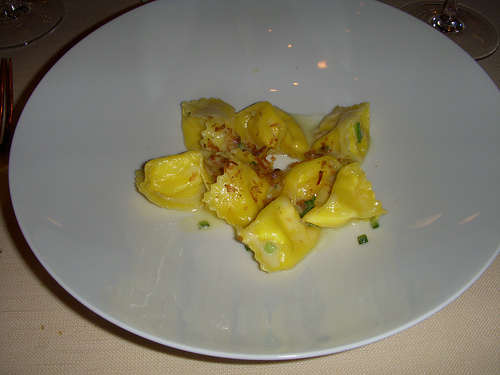