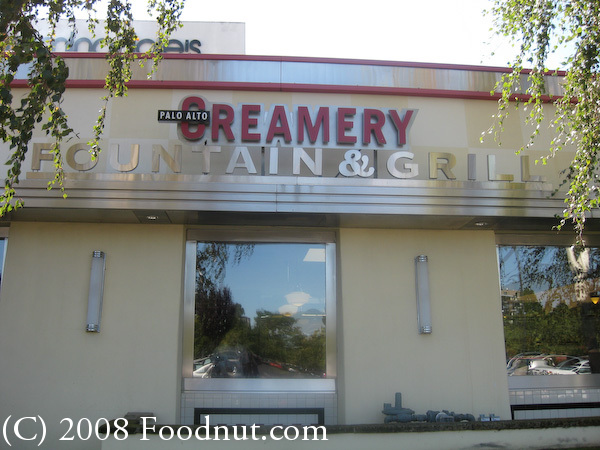 Palo Alto Creamery has been serving up classic burger joint food since 1988 when Robert Fischer took over the business. They used to have 2 locations in Palo Alto, with the downtown location open since 1923 in previously known as the Peninsula Creamery. Stanford Shopping Center location closed in 2013.

If you cannot find parking, park at the Palo Alto Civic Center garage at 250 Hamilton Ave.

They specialize in classic American food including burgers and ice cream fare. They serve breakfast, salads, sandwiches, and dinner entrees after 4pm. They have a $195 burger with Dom Perignon to celebrate selling your company! Our last meal was in 2016.

Palo Alto Creamery has a classic diner menu with everything from burgers to sandwiches to meatloaf and other American staples. Breakfast all day long! Dessert options are numerous, so keep some room open.

Yogurt Parfait ($9.95) is expensive, but pretty big.  Topped off with bananas, kiwi and strawberry, there is a bunch of hidden granola on the bottom.

Cheeseburger ($9.95) – with grilled onions, lettuce, pickles, tomatoes. 1/3 pound fresh natural certified Angus beef on a homemade bun. The Waiter did ask how we wanted it done, a major plus in our book. Medium rare had a slight pink center and was juicy. A decent burger, but not spectacular. Meat quality was fair with the ground-up meat being fairly loose and no Angus flavor detected. Cheese was pretty average. At least the side salad was fairly large and had some decent greens.

BBQ Bacon Cheeseburger ($10.75) – with BBQ sauce, bacon, grilled onions, lettuce, pickles, tomatoes. They did ask how we wanted it done. Not a big premium to the Cheeseburger’s price. A nice combination of stuff, but very messy. Their french fries are better than average, thick and full of potato flavor.

French dip ($11.95) was a reasonably sized roast beef sandwich with a slightly watery dipping sauce. Flavors were reasonable and the fries were good.

Chicken Quesadillas ($13.95) is not cheap and possible not the best thing on the menu. Several large pieces probably cooked by Hispanic cooks, making this real Mexican food.

Root Beer Float ($6.50) – A wad of ice cream on the side of root beer. They do give you more root beer if you ask. Nice creamy Vanilla ice cream. On our last visits, they were far skimpier with the ice cream.

Apple pie ($4.25) was a huge tall slice of their legendary pie. It featured huge chunks of Apple and hit the spot. We have had this in the past and swear the quality has fallen slightly. They still sell a ton of these pies for Thanksgiving.

OK:
BBQ Pork Sandwich ($9.95) comes with fries or a salad, and is edible but not particularly great.

Service was fast and they did check back to see if we needed stuff fairly often, although they wanted to clear our table a lot faster than we wanted. The server blurted out things so quickly was hard to understand him. Price are pretty standard for a diner of this sort. The burgers were solid. Places that can beat Palo Alto Creamery’s hamburger include Pearls, Custom Burger, Mos, or even Palo Alto’s The Counter.