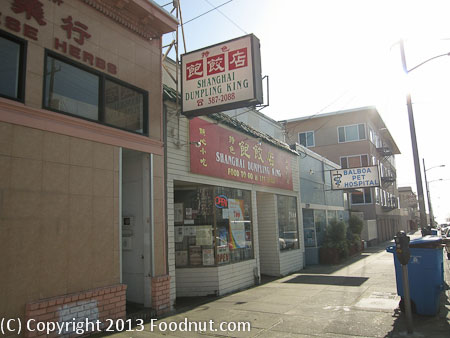 Shanghai Dumpling King is a Shanghainese Chinese restaurant in San Francisco’s outer Richmond district. It was recently featured on Check Please. They have a weekday lunch rice plate special menu. Our latest visit was in 2013, after 4 years. We were in search of the best Shanghai steamed dumplings in the San Francisco Bay Area.

There was a wait on a Saturday for lunch. You place your name on the waiting list, they take your order right before you get your table. They push a lot of table sharing. Shanghai Dumpling King is cash only. 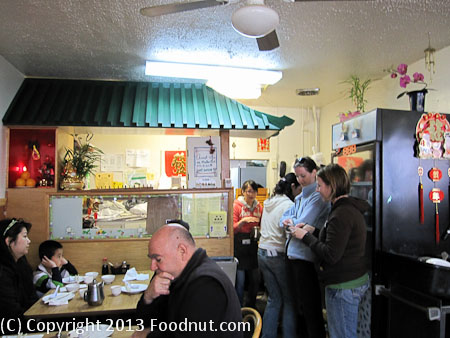 Decor, Vibe – Shanghai Dumpling King is a cramped restaurant with lots of people, servers running around. Decor is pretty bare bones. Lots of Asians and Caucasians of all ages dining.

Check out the review of Jade Garden in Beijing, China to see what real Shanghainese places serve. Another must visit restaurant in Shanghai, China is Fu1039. 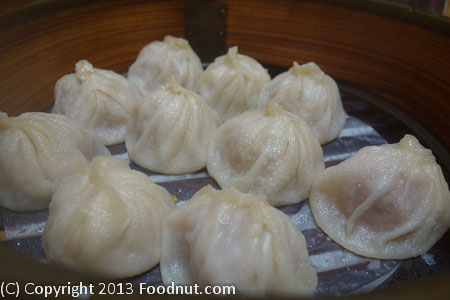 Shanghai Steamed Dumplings or Xiao Long Bao ($5.50 for 10) were pretty big but very tasty. After 4 years, they super-sized them. This did not make them very authentic.

Lots of flavorful soup inside and good flavored innards. The ones at Monterey Street in 2014 were a bit too sweet. These are hard to pick up without puncturing them, so be careful. You may want to pick them up by the very top tip.

The ones in China or at Din Tai Fung in Bellevue are not this big. Definitely one of the better ones in the San Francisco Bay Area, don’t try to compare them to Shanghai though. We order a second batch and a couple did not have soup inside. Hint: The first order was made when the restaurant wasn’t too busy. Millbrae’s Shanghai Dumpling Shop has very good Xia Long Bao.

Green onion pancake ($4.95) looked like they were dumped on the plate. Nice crispy crust, but not much scallion flavor. 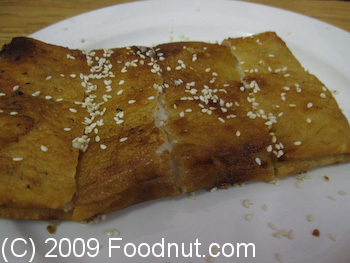 Rice cake with pork & preserved vegetables ($6.95) had large quantities of deliciously gooey rice cakes and a tiny bit of pork and vegetables. They overdid it slightly with the sweet soy sauce.

Clay pot Rice with pork was decent although they are lazy and just toss in pork that is not uniform in size. It comes in a metal pot, not clay pot!

Sauteed Pea Shoots ($6.75) were being pushed by the waiter. They did a good job on these, slightly watery. Got to eat your veggies. 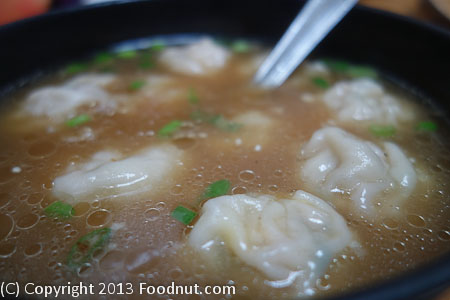 Hot and Sour Soup ($5.25) had lots of ingredients in it and was very spicy.

Super Egg Puff ($2.95 for 3) were awesome. They bring them around and ask if you want them. How can you say no. Fluffy and hot out of the fryer. Better than Koi Palace’s more expensive version.

Pan Fried Pork Buns ($5.25 for 8) were also tiny by decent. Lots of meaty guts and thin skinned. Only the bottom was fried, no soup inside. Not as good as the best in the SF Bay Area.

Deep Fried Sweet bun ($1.95 for 4) were a nice golden brown on top, but soggy on the bottom. Includes condensed milk for dipping. Most places like Bund Shanghai have better versions.

3 Cups Chicken Clay pot ($6.95) was a huge ‘metal’ clay pot filled with chicken and 2 kinds of mushroom. Flavors were ok but nothing great. The version at 5 Joy is far superior.

Steamed Sweet Rice ($2.95) was ultra sweet. The sauce was too sweet and add in the sweet black bean paste and you have a sugar fest.

Shanghai Dumpling King had decent service with servers running around the small space all the time. You could track one down fast. The prices were reasonable and food decent. It is one of the better Shanghainese Chinese restaurants in San Francisco. Not as authentic as a place like Din Tai Fung in Southern California or Bellevue, WA.

Slightly better, and more consistent Xiao Long Bao can be had at Shanghai Dumpling Shop in Millbrae. 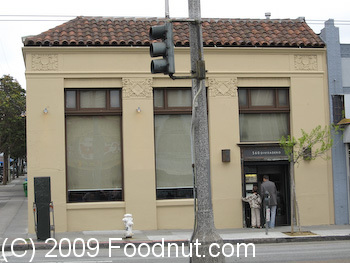