Why did we dine here? – Ben Tre (A city in Vietnam) has three locations on the San Francisco Peninsula.

A friend suggested that we give them a try, so we dined at the Millbrae, CA location. They are more than just a Pho restaurant, they call themselves a Vietnamese Homestyle Cuisine restaurant. Our last visit was in 2018.

Insider Tip – come for the food, ignore the marginal service. 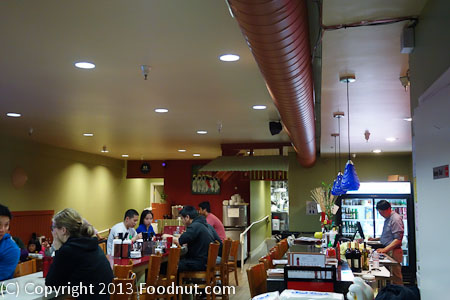 Service – Ben Tre did not have the best service around. You pretty much had to hail the waitresses to get things done.

Verdict – Ben Tre impressed us with reasonably priced food of high quality. They have a wide variety of items and are one of the better Vietnamese restaurants in this area.

Several folks stated that the owner cooks at the South San Francisco location, making the food superior there. We did not detect much variation ourselves.

Tamarine in Palo Alto is still one of our favorite higher end Vietnamese fusion restaurants nearby.

Ben Tre’s Menu features 14 different appetizers, 12 different types of noodle soups, 7 different rice vermicelli dishes as well as many other entrees. There are 13 different vegetarian dishes. A huge variety with Vietnamese names for each.

Chim Cuc Chien (Roasted Quails) ($8.50) included two butterflied quails roasted to a nice crisp texture. A bit bland, we had to use some of the included seasoning salt.

Bun Cha Gio, Tom & Thit / Bo / Ga Nuong (Imperial Rolls, Shrimp & BBQ Pork / Beef / Chicken Vermicelli) ($10.95) was recommended by our server. A nice overview of the various meats that they serve. Decent quantities and lots of vermicelli. You are supposed to pour the fish sauce all over this dish.  The pork only Bun Cha was very good with lots of meat.

Pho Tai Nam (Rare Beef & Well Done Flank) ($9.75) for large. There broth is slightly above average, the one at Pho Ao Sen in Oakland is better. Lots of noodles and accompaniments.

OK: (Order if you like this dish)
Five spiced chicken with garlic noodles ($12.50) had the same good noodles. Chicken was ok, not great or particularly moist. We’d go with the shaking beef instead.

Yellow Rice ($2.50) was an interesting dish. It was a little rich and didn’t work well with our digestive system.

It’s all about the salted butter 🧈