Why did we dine here? – China Live is a $20 million Chinese food extravaganza from Chef George Chen and crew. (Shanghai 1930, Betelnut, etc) Very ambitious, this complex seeks to help put Chinatown back on the map along with Mister Jiu. Billed as an Eataly of Chinese Food, we were chomping at the bit to try it, but waited 3 weeks for things to settle down. The food was still marginal at that point. We returned about 2 months after it opened and found things a lot better. They focus on high quality ingredients: organic, local, etc… 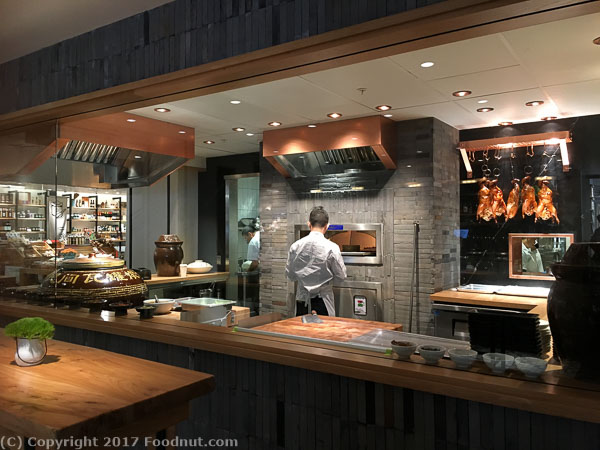 The marketplace next door is interesting, but is more like a museum. Not very large and frankly has nothing on Eataly. They need to kick it up a notch. Sell more snacks, give out samples, build some energy.

It seems like there were more concerned about picking out fancy expensive furnishing than serving killer food in the beginning. Hope that they succeed.

Service – China Live had much improved their service. The Chinese waiter clearly explained the menu and offered suggestions. He did fail badly by not asking what we want to drink, leaving us without anything to drink for a long time. It also faded at the end. The helpers did buzz by every once in a while.
Verdict – China Live is ambitious. It has risen to a level where those intimidated by Chinese restaurants or Chinatown would find solace eating here. Decent food, cocktails, in a nice clean setting. 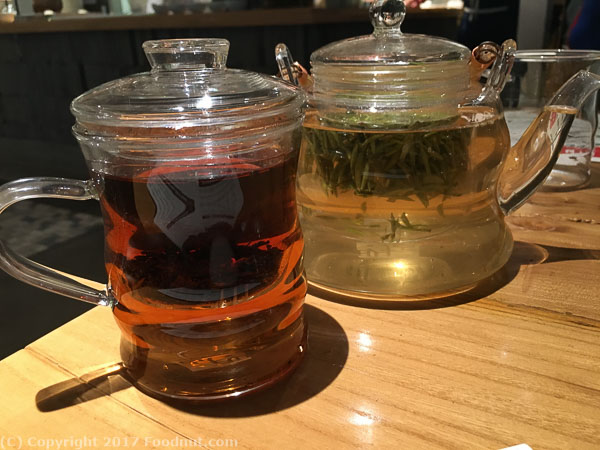 Dragonwell Longjing Green Tea ($13 pot) was some strong good stuff. They need to train the waiter to sell this stuff right after you sit down. 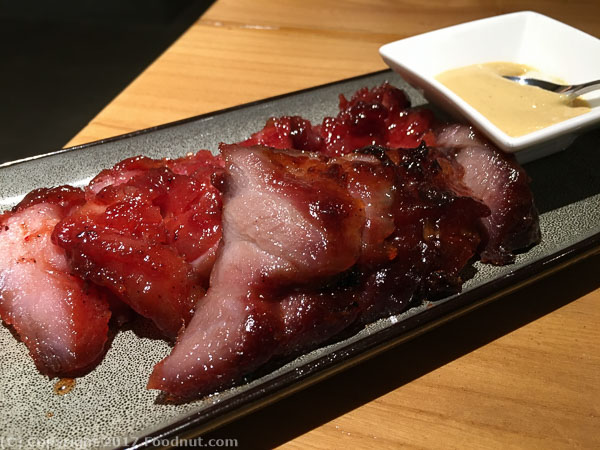 Kurobuta Pork Char Siu, Hot Mustard ($13) was recommended by the waiter. A decent rendition albeit a little on the sweet side. (honey) Flavor profile is more local Chinatown Cantonese than a Hong Kong Version. 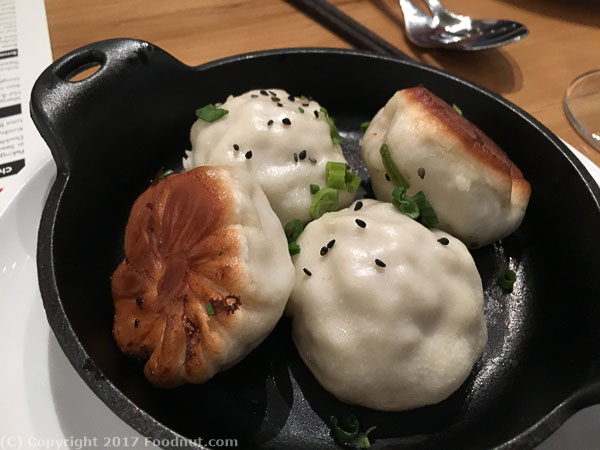 Sheng Jian Bao ‘SJB’ ($9 for 4) Pan-fried Pork Dumplings, Hot & Juicy Inside. Served hot from our dim sum kitchen every 20 minutes. These were decent, with good amount of soup, lots of meat, and a nice brown crust. Shanghai Flavor Shop in Sunnyvale makes the best around here. Like these? Fly to Shanghai and eat at Yangs Fry Dumpling – a religious experience. 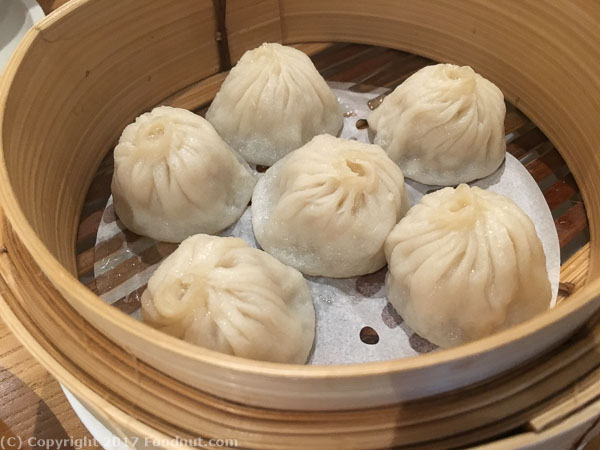 Xiao Long Bao ‘XLB’ (6) filled with Rich Consomme ($9) They need to just copy Din Tai Fung or even Yank Sing. Decent, but still on the large side. Filled with soup, but a tad lacking in flavor. 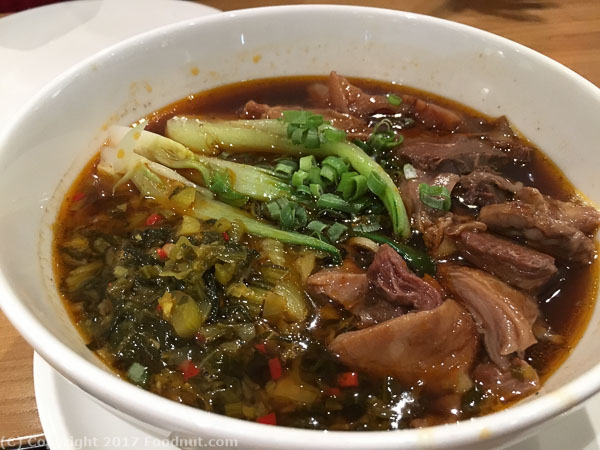 Taiwan Most Loved Lu Rou Fan Braised Minced Pork Rice Bowl ($15) was reasonable. Nice tender, yet dense meat in a savory sauce. With they served the claypot during lunch. Price did not match menu’s $13. 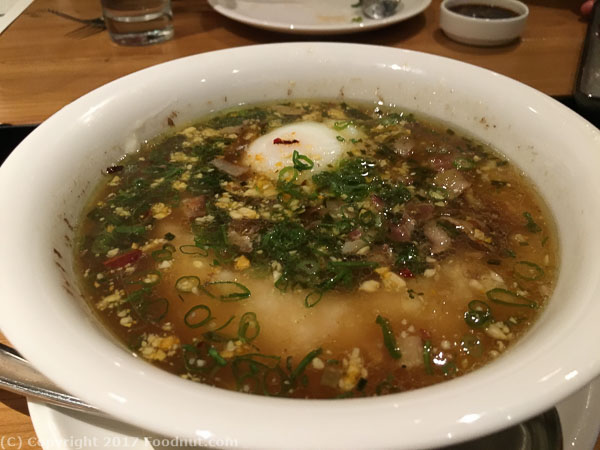 “Rou Zhou” Congee with Bacon, Chinese Chives, Poached Egg, Toasted Peanuts & Ginger ($12) looks very watery and odd, but hit the mark once you dig into it. 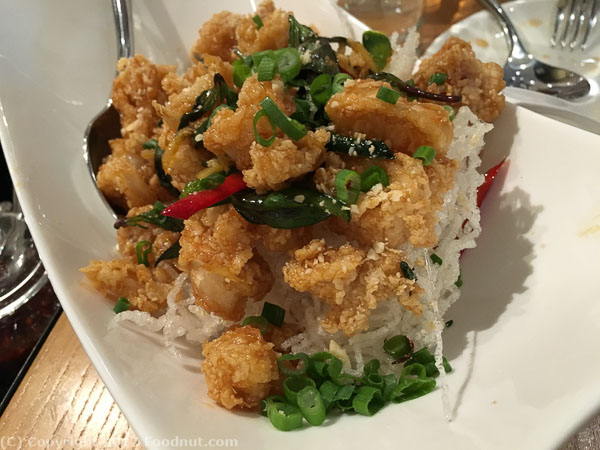 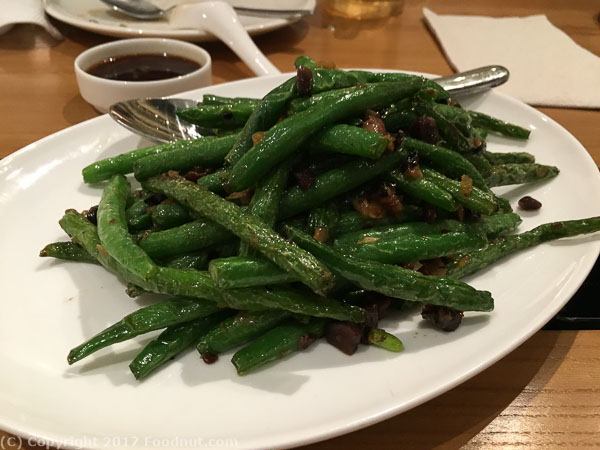 Sichuan Blistered Green Beans, Olive & Pickled Salted Plum, Mushroom Toon ($13) were cooked just right but a tad under salted. You had to intentionally pickup beans and the other items to get some balance. 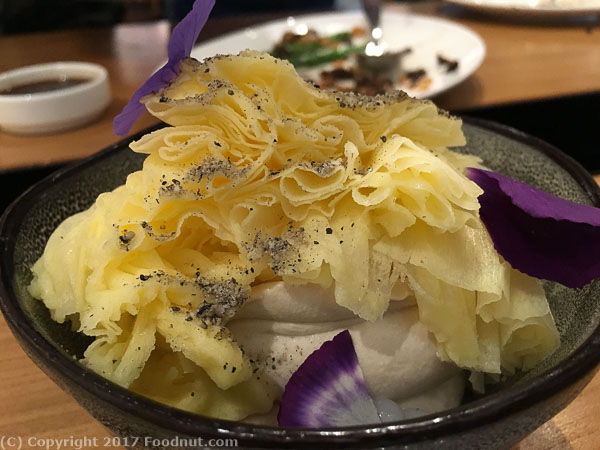 OK: (Order if you like this dish)
Peking Duck with Kumquat Glaze, Traditional Condiments in Sesame Packets (3 pieces $14) is a lot different than most. It is served pre-made, inside a thin pita like pocket. Ours came to us cold, so we kicked it back. Hopefully it is better now.

Basket of Fried Scallion Bread ($6) is a northern Chinese dim sum dish that has a crisp top but not much flavor inside.

Pans: (We would not reorder these dishes)
Coconut Rice Pudding ($7) Ginger & Passion fruit was dense and gritty. Not much coconut flavor.