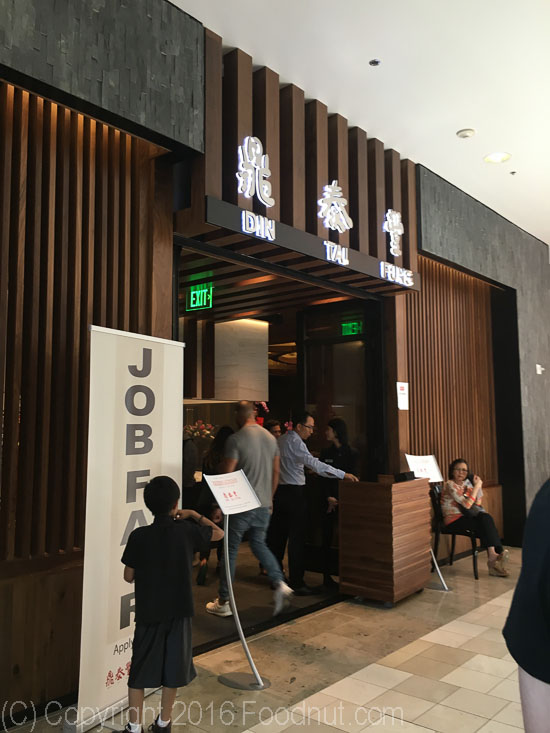 Why did we dine here? – Din Tai Fung is a popular Xiao Long Bao (It means small bamboo steamer bun in Chinese) – Shanghai Steamed Soup dumpling restaurant with locations in Bellevue, Seattle, Southern California, Taiwan, Japan, China, Indonesia, Macau, Singapore, and several other countries. Few Chinese dishes generate so much obsession. Think of it like a quest to find the best burger or pizza. We have been to this location several times. Last visit was in 2019.

They stopped taking reservations 3/1/2017. If you want to avoid the long wait, come during the weekday for lunch after 2pm or right when it opens.

Compare the Dumpling making to the real deal in Taiwan: 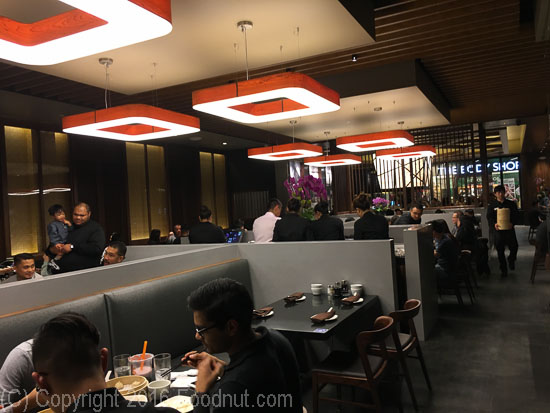 Of course we wanted to dine at this local Santa Clara location! Apparently hundreds of our closest friends had the same idea. We waited several hours to get in. They started taking reservations after their first week of operations.

The dumpling makers were flown in from different Din Tai Fung locations including Taiwan. They claim the dumplings should be identical to all other locations outside the US.

We never thought of ourselves as xiaolongbao fanatics, but after visiting many San Francisco area restaurants rumored to have good steamed dumplings plus Din Tai Fung Hong Kong, Shanghai, Arcadia, Glendale, Bellevue, Singapore, Kuala Lumpur.. Numerous top rated restaurants in Shanghai.. I guess we are guilty.

Are these authentic Xiao Long Bao?

In late 2014 we made a pilgramage to a branch of Fu Chun in Shanghai, China – Dianping listing all branches of this authentic old school xiaolongbao restaurant. Modern day Xiao Long Bao should really be called Nanjing tangbao with the thinner skin and lots of soup.  The real dumpling deal at Fu Chun was meatier with a leaner filling, thicker skinned, and possessed not much soup. This restaurant has several locations in Shanghai, be sure to visit one when you are in Shanghai. Any real XLB enthusiast needs to understand what authentic XLB is.

Din Tai Fung Taipei 101 reminded us how xiaolongbao or Shanghai Steamed Dumplings should taste and look. They are constantly cranked out with robot like precision. The Southern California branches achieve roughly 85% of the quality of this branch. It amazes us that virtually no other Chinese restaurant in the San Francisco area comes close. A super sized dumpling or one in a foil basket is a dead giveaway for compromise. Don’t even bother to order these at a Cantonese Chinese Restaurant!

You can see that each dumpling is compact, uniform, 18-fold crown, weighed down with soup when you pick them up. The meat inside is not huge yet the soup is full on a slightly meaty flavor.

On our latest trip to Asia, we had a chance to compare these Din Tai Fung Taipei super dumplings to the real deal in Shanghai. In the past, we found Jia Jia Tang Bao in Shanghai running ahead. This time, we noted that Jia Jia’s consistency is less than Din Tai Fung. You had dumplings slightly differing in size and shape. Quality wise, we would have to give the nod to Din Tai Fung Taipei over Jia Jia Shanghai, China. Jia Jia is also notorious for running out of pork dumplings around noon, then forcing you to order the more expensive crab ones.

Did you know part of the Valley Fair mall is in another city (Near Macy’s Men Store), Santa Clara? Some stores like Gap have half the store in another City! The minimum wage was different for a while.

Service – Din Tai Fung was friendly and efficient. The staff was overwhelmed with the lines but remained pleasant and more than attentive. Impressive. Most Americans have never experience this level of service at a Chinese restaurant.

Din Tai Fung’s Menu is pretty extensive with lots of appetizers, dumplings, noodles, greens, buns, drinks, and dessert. Lots of pictures make it easy to order. They include a lot of vegetarian and gluten-free options. We are here for the dumplings, so we try to waste as little time as possible on the other items. It appears they use this menu Worldwide.  Prices have climbed slightly on each revisit.

Foodie Note: They have mini pork dumplings on the weekend mornings, so you may want to TIME your visit. 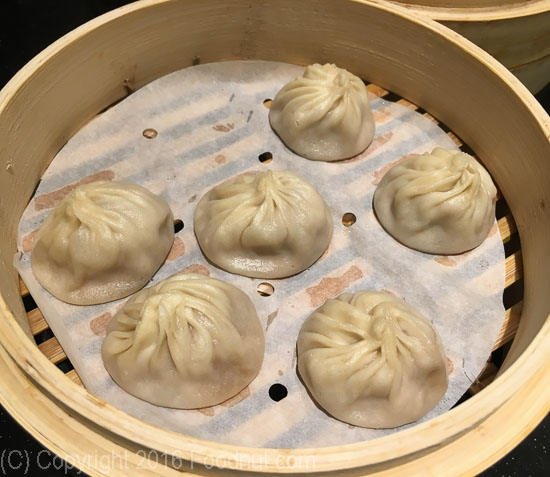 Juicy pork dumplings or pork Xiao Long Bao (6 pieces for $8.75) contain a resonable quantity of warm and flavorful soup with subdued meat flavor. A thin wrapper (but not overly fragile), even though they were fairly small and delicate, yet baggy dumplings. Thicker cap. The initial bite and sucking of the soup resulted in an burst of flavor. We would rate these very good, better than many restaurants in the United States.  Din Tai Fung Santa Clara has definitely gotten more consistent over the years.

They use bamboo steamers, unlike the Southern California locations. These need some time to get seasoned to achieve their optimal effect.

The dumplings in their flagship Taipei Taiwan location, were not sticky, had more soup, and hit you with more robust flavor. They use Taiwanese black pig in Taiwan. If you are a XLB newbie, you would probably not know the difference. 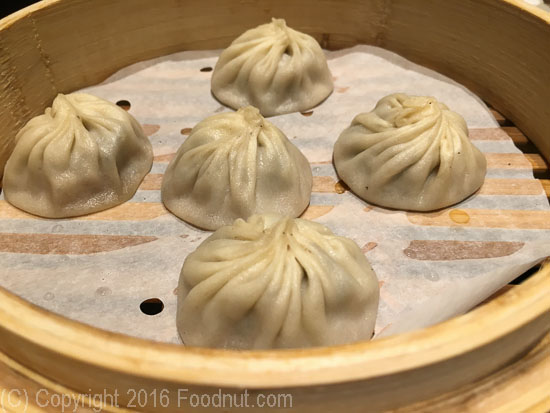 Truffle and Pork XiaoLongBao ($25 for five pieces) are their flagship dumpling. Expensive at $5 a bite! Only $3 a bite in Taiwan. Made with legit Italian truffles. You can smell the rich truffle essence before you even bite into them. The waitress told us not to use any sauce or ginger. Very good, but no foodgasm like we had in Taipei’s Din Tai Fung.

Fish Dumplings (6 pcs for $8.75) are larger dumplings filled with chopped up fish and some soup. A nice change from all the Xiao Long Bao.

House chicken Soup ($8.75) is expensive but includes lots of tender chicken that is long boiled.

Fried Pork Chop ($6.75) is a classic Shanghai dish done well here.  It is not battered and is spiced with a Chinese glaze.

Vegetarian Bun ($2.90) hits the spot for vegetarians.  You can also order the sweet bun.

Sauteed Kale ($11.50) is done well and come with ample quantity. Definite must for vegetarians.

Soy Noodle Salad ($5.75) is a must order for vegetarians.  Nice tender noodles and a mild sauce.

House Beef Noodle Soup ($10) come as a clear broth or brown broth version.  The clear one is more pure and a little lacking in flavor. Stick with the brown.

Tofu Puff Glass Noodle Soup with pork ($9) could easily be a great vegetarian dish without the pork.

Eight Treasure Rice ($6) is a small individual portion.  Nicely done but not outstanding.

Peach Slush with Boba ($5.50) is a bit expensive, but the tall glass hit the spot.

Matcha Smoothie with Boba ($6.25) is a nice drink to get. Strong flavor. Ask for it in a to-go cup, so you can drink it later.

Chocolate and Mochi XLB ($8) were small but very chocolaty.  Order only if you really like this.

Hot and Sour Soup ($6) is more filler for the dumplings.

Kimchi & Pork Dumplings ($9.25) are ok, but why are you wasting stomach space for them?