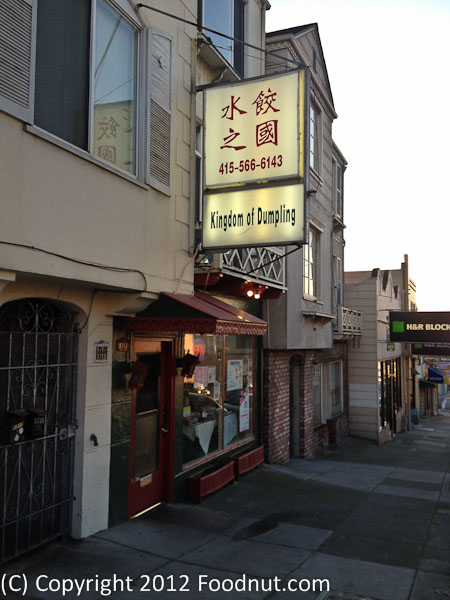 Why did we dine here? – Kingdom of Dumpling is a small Chinese restaurant specializing in dumplings. Being large dumpling fans, we decided to finally give this place a try. There are few restaurants with this variety of dumplings on the menu. The place has been featured on Check Please, so it has become busier over the years. Lots of to go orders. Our last visit was in July 2016.

Insider Tip – The restaurant is tiny, so come early or else you’ll have to wait. To go might be a good option.

Kingdom of Dumpling SF Menu includes a variety of starters as well as 19 different types of dumplings. They also have typical Mandarin style Chinese dishes. The menu is very short and succinct.

Pork Dumpling with Napa Cabbage ($6.45 for 12) were above-average dumplings filled with tender filling.

Lamb Dumpling with Chinese Vegetables ($6.95 for 12) were also decent, but a little lacking in flavor. Chicken dumplings with Corn ($6.95) were a change of pace from the usual pork ones.

Beef Pancake ($5.95) was a good sized and not too greasy pancake.

Green onion pancake ($4.95) was thin, pale and low on flavor, so it was barely acceptable.

Shanghai Pan Fried Dumplings ($4.95 for 4) were pretty good, but possessed very little soup.  Nice crisp bottom.  They took a while to arrive, as the kitchen is small.

Garlic String Beans ($6.95) were a solid rendition of the classic dish.

Pans: (We would not reorder these dishes)
Hot and Sour soup was not on the menu and probably shouldn’t be on the menu. Spicy and lacking flavor.