Taqueria La Cumbre Mexican Restaurant has a location in San Francisco and San Mateo. We tried the one in San Mateo, located near Caltrain. They have everything from burritos to tacos to caldos to plates. The San Francisco location has lines often times. Our last visit was in 2017. The great thing about his place is the parking lot!

Decor, Vibe – Old fast food joint that has been taken over. Families, locals, people of all ages were dining. Not a lot of Hispanics though. 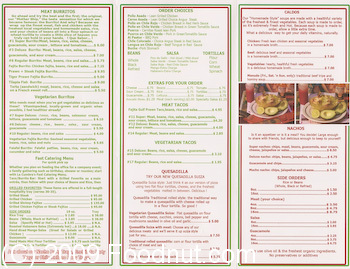 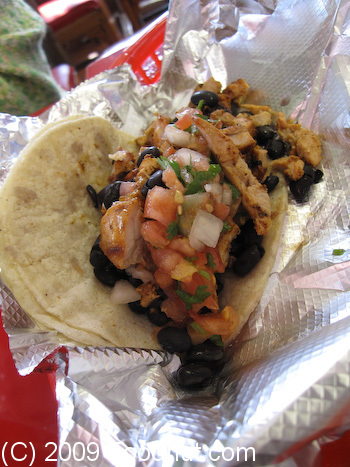 Chicken Taco ($2.85) was of decent size and had a good amount of chicken. The hot salsa was really hot.

Prawn Deluxe Taco ($4.95) with beans, rice and salsa did not have a lot of prawns, but was flavorful. More sauce than most, making it a little mushy.

Horchata ($3.25, large) was very good. Very Sweet and lots of cinnamon flavor. Cut this down with some water.

Chicken Quesadilla ($7.50) had red and green bell peppers added in. It was pretty massive. This was a decent dish, nothing extra special to it. In 2017 they started rolling it up like a burrito.

Petite Al Pastor Burrito ($4.75, Regular size $7.95) was reasonably sized but was far too spicy considering we wanted mild.  The meat quality was not high.

Taqueria La Cumbre Mexican Restaurant has solid Mexican food although it took a while for it to come. Compared to nearby Pancho Villa, the food is about the same quality or less. The Roach Coaches in San Francisco and even in San Mateo offer better fare.