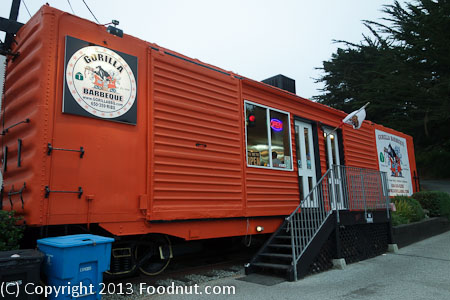 Why did we dine here? – Gorilla BBQ is a restaurant located inside a railroad car on the side of Highway One in Pacifica. We’ve read about this place (it was featured in the Wall Street Journal) and finally got a chance to try it, after driving through the beautiful new Tom Lantos Tunnel.

Insider Tip – Get the 3 Meat Combo. No seating inside or outside, so be prepared to eat in your car or drive to the beach.

Service – Gorilla BBQ had friendly, efficient service with good recommendations.
Verdict – Gorilla BBQ hit the spot for large quantities of quality meat and sides. Be sure to check it out if you are passing through this area. This BBQ might be better than Memphis Mini’s in San Francisco and Mack’s in San Carlos.

If you are interested in higher end cuisine, keep driving south on Highway One to Peruvian Michelin Starred La Costanera in Montara Beach.

2 Meat Combo ($15.25) with Pulled Pork and ribs, Potato Salad, Corn on the Cob, Beans and Rice, Cornbread, BBQ Sauce had a ton of ribs along with a good helping of tender pulled pork. The meats were pretty smokey and the BBQ sauce on the tangy side and not too sweet. The corn was probably frozen and not in season. Clearly they know how to smoke their meats. 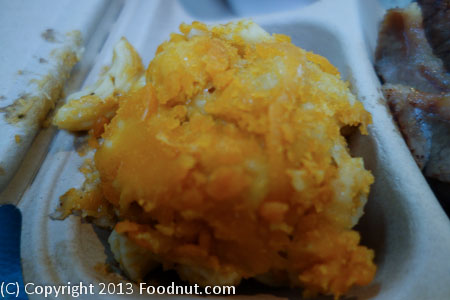 Kiddie Combo ($6.25) with half a portion of beef brisket, Mac and Cheese, Cornbread, BBQ Sauce. This had a liberal helping of tender, smokey brisket. A good choice for beef lovers.