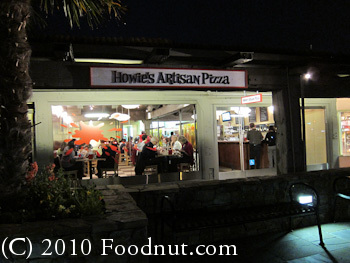 Howie’s Artisan Pizza was opened by Howard Bulka in late 2009 into Town & Country Village shopping Center of Palo Alto. He had worked at various restaurants including Marche. Inspired by the New Haven school of East Coast pizza-making and the renaissance of artisanal products including organic, natural, and local ingredients. Our last visit was in the beginning of 2015 when we noticed that pizza prices went up again.

Howie’s Artisan Pizza Menu (Click to zoom into any picture)

Howie’s Artisan Pizza Menu has appetizers, salads, sandwiches, and several varieties of pizza. You can order half half on your pizza. 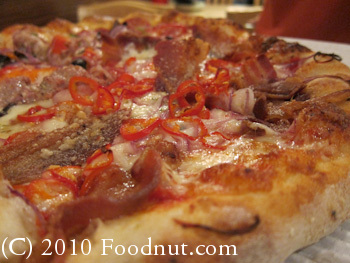 Pancetta, red onion, red chili ($15) house made pancetta, spicy red Fresno chili, red onion, mozzarella cheese, and tomato sauce was not too spicy, had lots toppings, was chewy not crispy. Stiff hard pancetta and a greasy pizza. In 2011, we found that they discontinued this pizza because the house-made pancetta was too time consuming.

Baked potato pizza ($18) scallop potatoes, Swiss cheese, crisp bacon, Rosemary, and chives had a crispy crust, and several thin potato layers, making for a nice thick pizza. In 2011, they started to chop up the bacon, making it look nicer but diluting the bacon effect. Expensive pizza. 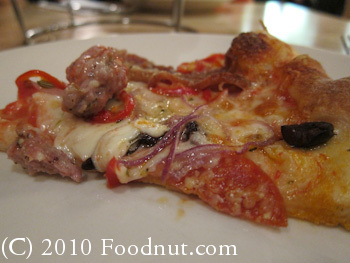 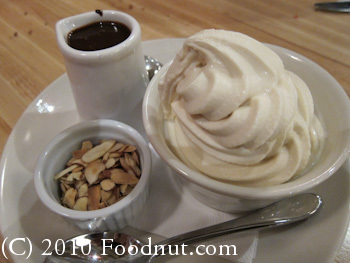 Soft serve ice cream ($5) with hot fudge, and almonds was a large desert with high-quality ingredients. Enough for several people.

Howie’s Artisan Pizza takes 20 minutes to make their pizzas. Complimentary filtered water. Servers were patrolling, asked how stuff was and accommodated a botch by redoing a pizza without questions. Howie’s Artisan Pizza serves up solid thin crust pizza on the San Francisco Peninsula.

Foodies, be sure to try San Francisco’s Gialina or Oakland’s Pizzaiolo for the ultimate in thin crust pizza.
Low cost wine with glasses from $5, bottles from $16 and several selections. 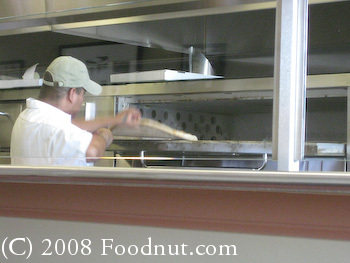