Foster City is a suburb of San Francisco and not known for its food.  Here are a couple worthy spots.

This place is, as the name would suggest, an epicenter for chicken. It serves it up in tacos, in buns, and stand alone, including trendy preparations like Nashville hot chicken. The chicken comes served with a huge number of different toppings and sauces, from the traditional (like mayo and ketchup) to Greek yogurt ranch and Asian-inspired sauces.

The ambiance is very relaxed and fast-casual, with a bright interior and a fair amount of seating. I ordered the Nashville hot chicken which, happily, was spicy without being too spicy. It came with a side order of fries, which were fairly standard issue. Looking around, I’d anecdotally say that people tended to prefer the sandwiches to the tacos, with the Nashville hot chicken being a big favorite, especially for groups.

All-in-all, Starbird Chicken is a pretty solid bet for a fast-casual restaurant and has enough variety to keep diners coming back.

Dozo Izakaya is a solid sushi restaurant, serving up both the normal assortment of rolls and sashimi, but also an extensive menu of sakes, bento boxes and teriyaki preparations. The menu certainly seems like it would have something for everyone.

During my visit, I can definitely say that the sushi was fresh, well-prepared and generously portioned (for sushi, anyway). Their prices were by and large reasonable, with some items seeming to really be deals, including a chicken teriyaki dish that was priced at only $5.99.

The restaurant itself had a calm ambiance, a good mix of families, couples and solo diners and—judging by the number of people coming in and out—a bustling takeaway and delivery business. I would highly recommend this restaurant for people wanting a reasonably priced and comprehensive menu of Japanese favorites. While I wouldn’t say that any dish by itself was a stand-out, the food is high quality, fresh and consistent.

Waterfront Pizza was the busiest of the three restaurants I went to, divided between an outdoor patio and an indoor seating area. The restaurant offers an eclectic menu of Mediterranean-style dishes that go beyond pizza, including falafel, fries and pastas. It presents itself as something of  a fusion between Italian, Greek and Middle Eastern cuisines.

The dishes came out steaming hot and were clearly made to order. The pizza was fresh, not too chewy, and had a nice mixture of toppings and olive oil drizzled atop it. The same goes for the garlic fries, which were—for me—the highlight of the meal.

Like Starbird Chicken, the restaurant is very casual and would be a good bet for families, couples, friends or solo diners. The restaurant has nice water views, a good ambiance, and friendly servers.  The menu is extensive enough to bring customers back in for repeat business. 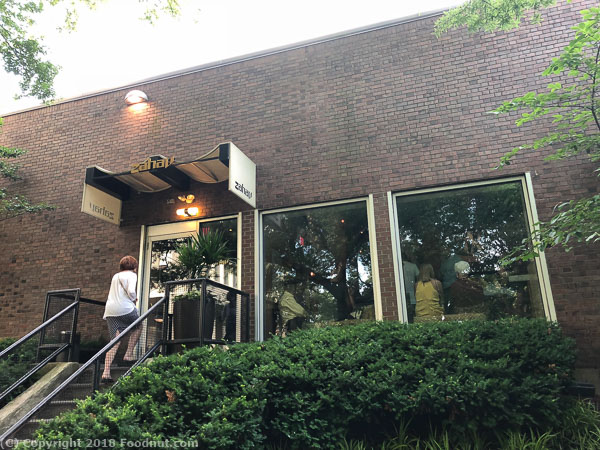