Shabu House is a Japanese Beef Fondue restaurant with locations in San Francisco and Burlingame. Shabu Shabu is a Japanese culinary dish which inspired from the Mongolian tradition of nabemono, or “one pot” cooking. In traditional shabu shabu, thin slices of beef are placed in a communal pot of boiling water and swished back and forth until cooked. We went to the new Burlingame location, open since late November 2009. The San Francisco one opened in late 2007. 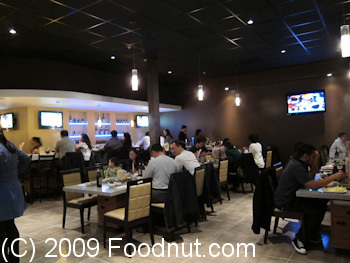 The big attraction to this place is All you can-eat-and-drink for $39.95. This includes beer, soda, or sake, but you are limited to two hours. (Some reports have indicated flexibility in their timing) The Shabu House SF, CA can get rowdy after the booze hits home. People could battle over using the bathroom!
Decor, Vibe – New remodelled fancy decor with lots of flat screen TVs, counter, many tables with two hot pot stoves, private room. Asians in their 20’s were mostly dining. This place was packed and it opened only 2 weeks ago. No advertising and it is hidden away from the main drag. Amazing.

Shabu House Menu (Click to zoom into any picture)

All you can eat menu 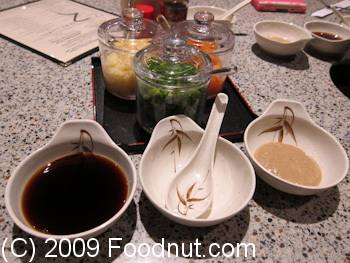 The ginger Chicken broth was a much better than plain water.

Agedashi Tofu ($5) was a nice mound of deep fried tofu with bonito shavings and seaweed. Tofu was pretty fresh.

House Sake (Hot) ($5 Large) was a great value and decent quality too.

American Style Kobe Beef Shabu Shabu ($18.99 Large) Comes with assorted vegetables, udon, rice and ice cream. Quality of the beef was lacking even though it was marbled. Shabuway and Prime Rib Shabu have better beef. Hey with all you can eat, what do you expect. Don’t let the word Kobe skew your views

Edamame ($2.50) had nice quantity but included a couple bad pieces.

Shabu House opened 2 weeks ago and had service that was getting in sync. The place is a great value for all you can eat/drink. For better quality hit Shabuway in San Mateo and Mountain View, or Prime Rib Shabu in San Francisco.

Hot pot Shabu Shabu is fun way to eat, and great for groups. Order a little first and then add more if you have the room. It is easy to overeat when chowing on small bites at a time, so eat slowly. Don’t forget to drink the leftover soup when you’re done cooking. A good hot pot restaurant is Japanese Hot pot restaurant Shabuway. Their meat is better, but their menu is more limited. Prime Rib Shabu in San Francisco is also a good bet. Hot Pot restaurants in Beijing are interesting in their diversity.

If you want pure gluttony, come here. Burlingame location had a grand opening special with 15% off entire bill from 5-6pm. Check to see if that is still active.