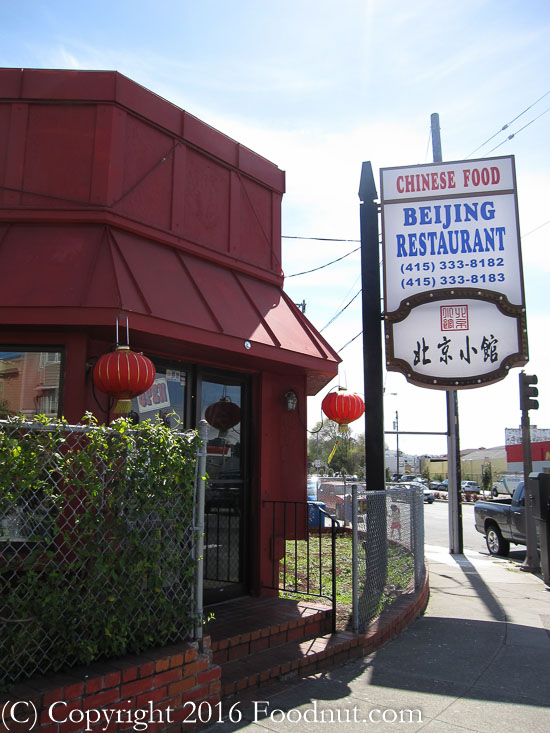 Beijing Restaurant San Francisco is a Beijing style Chinese restaurant in San Francisco’s Excelsior district that opened in early 2009. Located a couple blocks off Highway 280 near City College, this place has gotten lots of hype on Chowhound. It is a family owned place that focuses on authentic Beijing dishes. Basketball player Yao Ming had been here 2 days earlier to one of our visits. We dined here last in 2016 when we learned they have added a location in the South Bay.

Here are some reviews of some interesting places we have been to in Beijing: Old Beijing Zhajing Noodle House – Da Dong Roast Duck

Decor, Vibe – Beijing Restaurant is of small 12 table restaurant with typical basic Chinese restaurant decor. A mix is Asians, Hispanics, and Caucasians were dining when we were there. Most were eating inexpensive lunch rice plates. Lots of to go activity was occurring as this restaurant does a lot of to go business.

Beijing Restaurant Menu Pictures (Click to zoom into any picture)

Beijing Specials are the best bets

Beijing Restaurant has over 150 different items from Americanized broccoli beef to their Beijing specialties. Be sure to concentrate on these specialties. Prices went up about 10% from our last visit. Their new menu has plenty of pictures, making it easier for those who do not read Chinese.

Peking Duck ($38.95) in Three Parts. This is a huge dish, so make sure you call ahead and bring at least three hungry foodies.
Part A, House Made Duck Soup – The soup included the duck along with tofu, Napa cabbage, and vermicelli noodles. While the broth was not as potent as Koi Palace, this was still a solid soup. They kindly refilled the broth when we have finished most of it.

Part B, Slice Peking Duck with hand made pancake (8 pancakes, including dipping sauce, cucumber, shredded green onions) – Easily exceeded our modest expectations. Crispy skin, liberal amounts of meat under the skin, super thin pancakes, and very nice flavors to the duck. While this did not taste like true Peking duck we’ve had in Beijing, this was pretty darn good.

Part C, Salt and Pepper Peking Duck – They took chunks of the duck and deep fried them in a light, eggless batter. The results were crispy, slightly greasy, salty, and still pretty boney. This dish had to be eaten with care as the bones are not chewable. 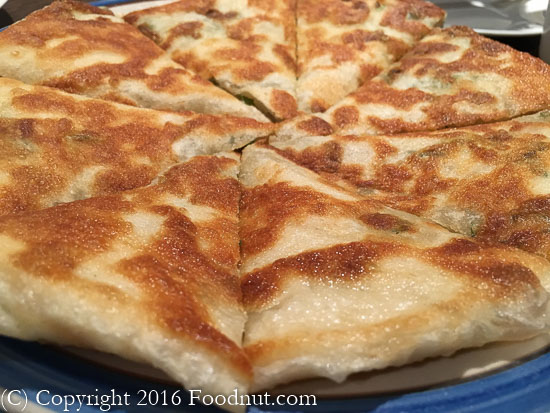 Beijing Beef Pancake ($7.95) had lots of beef sandwiched between layers of a pan fried scallion pancake. A very good version especially when eaten fresh and hot as the bottom gets greasy fast.  We also had the version with egg and found it hot and tasty.

Scallion Pancake ($8.95) is different than most restaurants.  A big bundle of golden brown goodness that is softer and not very crispy. It does taste good and satisfies our pancake needs. Not sure why it costs so much.

Sweet and sour pork Beijing Style ($10.95) were tender chopped riblets with a lightly sweetened sauce. Good implementation of the classic. This is different from the Americanized or Hong Kong version.

Sweet and Sour Pork ($7.50) was an excellent version with freshly fried meat and a very tangy sauce. Eat it hot! 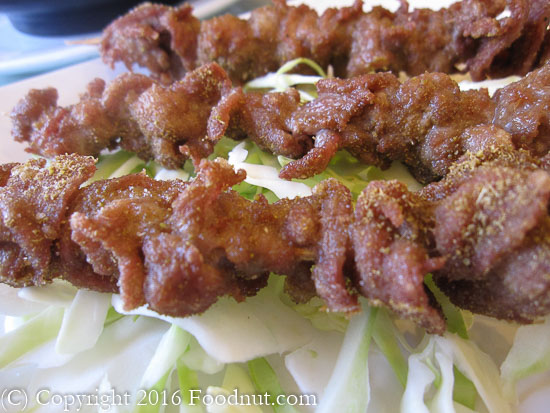 Fried Lamb Skewers ($5.95 for 4) were deep fried with cumin. Hot spices on the side. Crunchy, slightly gamey, but good.

Tower of Fried potatoes or heung lat guan see ($9.95) is not on the menu but can be ordered by asking nicely. Crispy thinly cut potatoes drenched in a zesty slightly hot/sweet/sour sauce. Very yummy with the included sauce.  The owners had a modern dish like this in Beijing and wanted to recreate it here.They might not be able to cook this any more.

Another off the menu dish is Pigs Feet Beijing Style. We have an excuse to come back now! 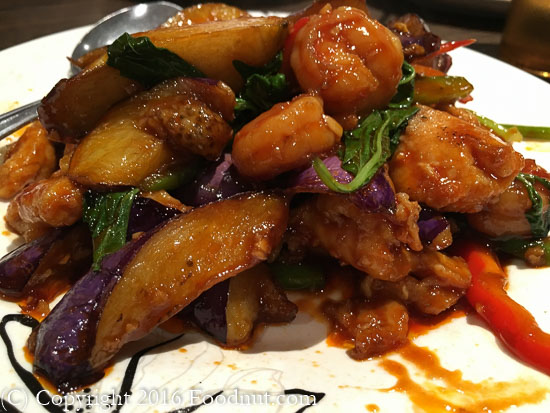 Beijing Eggplant ($10.95) was awesome. Tender eggplant with chicken and a little shrimp with a slightly sweet sauce. The picture makes it looked pretty plain, but this dish is a must get. Sometimes it is a bit greasy.

Sliced Fish with Preserved vegetables in warm pot ($12.95) was a huge pot placed on top of a sterno warmer. Lots of tender fish in a robust broth.

Cumin Lamb ($11.95) large quantities of thinly sliced with cumin, dried chilies, bell peppers was a spicy and excellent dish. Good lamb flavor made this one of the best versions in this area. Beijing Restaurant uses both cumin powder and cumin seeds in this dish. No grease like other places. They can also cook it with beef or chicken. We tried the Cumin Beef in 2016 and did not like it.

Stirred Flour Ball with Three Flavors ($9.95) was a stir-fried mix of beige colored diced wheat flour bits topped with a couple slices of shrimp, fish, and chicken. A chopped up Shanghai rice cake-like dish, with lots of crisp zucchini and peas and carrots rounded out this solid home style cooked dish. We also tried the version with chicken and another with lamb and found it equally as good. The al dente flower balls will test your chopstick skills.

Sauteed Pork Liver Beijing Style ($9.95) is a classic dish full of strong flavored liver with a bit of a kick.

House special hot chicken wings ($13.95) were piping hot out of the fryer and stellar. Not overly spicy, tender and juicy on the inside. Messy but worth it. Up there with San Tung’s.

Fried Sweet Cake Beijing Style dessert ($8.50) is a version of a Pan Fried Red Bean Dumplings or a chopped up dim sum style Sesame ball. A sprinkle of sugar on top of the fairly low key red bean.  It was even better the next day when we pan fried it.

Homemade Chilled milk pudding was available at the Irving Street location. They were kind enough to let us try one. Very smooth with light milk flavors. On our next visit, they did not have any.

Beef Noodle soup ($7.95) had hand pulled noodles in a simple broth. Thinly sliced beef cold cuts topped it off. Average, perhaps the Beijing Noodles with special sauce is the way to go.

West Lake Lamb Dumpling ($7.50) were a bundle of dumplings with ground up filling. Fair, not as good as San Tung’s. They were better pan fried the next day as left overs.

Nappa with Pork Dumpling ($7.95) were a bundle of dumplings with ground up pork. Also fair, not as good as San Tung’s.

Five-color Vegetables with Beijing Clear Noodles ($12.95) was another modern dish made with fairly stiff home-made mung bean noodles tossed with julienned cucumber, sliced red and green peppers, bits of pork, lots of cilantro, brown sauce, and strips of scrambled egg. A big salad that is interesting but overdone with cilantro. Reminded us of Burma Super Star’s salad.

Hot Braised Beef Tendon ($9.95) came with lots of chewy tendons a ring of Shanghai baby bok choy and seemed more like a Cantonese Chinese dish than a Beijing one.

Hot and sour soup ($5.50 for small) was a bad implementation of the classic. Avoid it.

Beijing Restaurant had decent friendly service with food coming fast and refills offered on a timely basis. This restaurant offers up some very good Beijing Chinese food and at reasonable prices. Don’t come here for Kung Pao chicken or Hot and sour soup, stick to items on their Beijing special list. We can easily recommend this place and would love to explore the menu further. 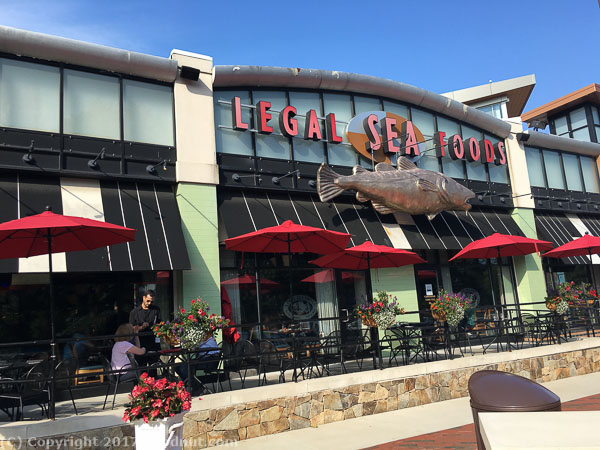