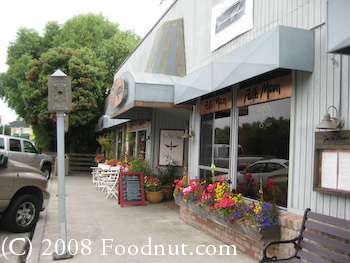 Pasta Moon is one of a handful of restaurants on Main street in Half Moon Bay.
It was time to try it, as we’ve been to Cetrella and Sushi Main too many times. 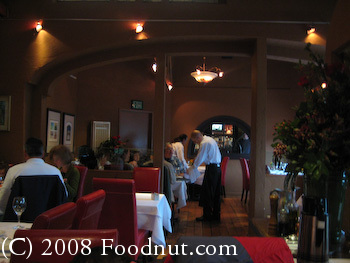 The decor is modern and a little more upscale than expected. Tabled clothes! This Italian restaurant is open for both lunch and dinner. They got a Wine Spectator Excellence commendation in 2007. 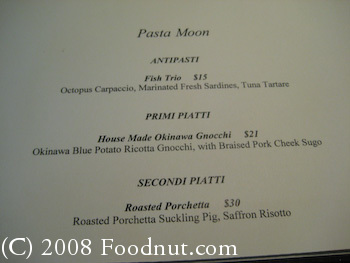 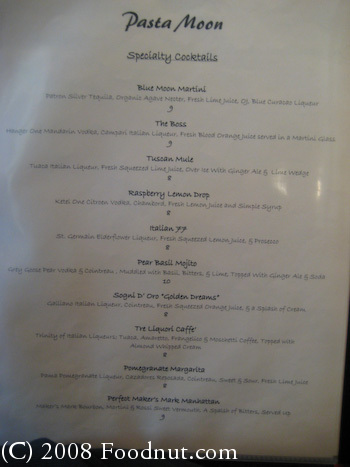 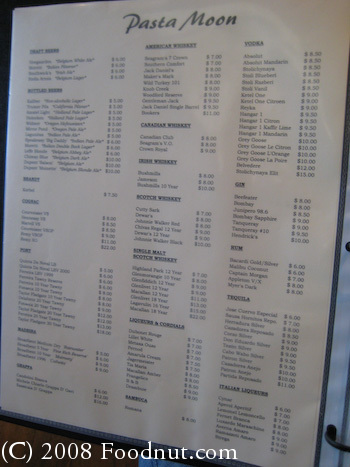 House Made Sausage Pizza ($18) with Smoked Prosciutto, Forest Mushrooms, Fontina Fonduta was a good pizza. This was almost like a thin crust pizza made from a thick tortilla.  The toppings were plentiful. We had just eaten at Pizzetta 221 the night before, so it was easy to compare.

Pasta Moon Clam Chowder ($9) had lots of clams and other goodies, but the broth was a little thin on flavor.

Linguine ($23) Rare Pan Seared Ahi Tuna, Garlic, Capers, Oil, Cured Olives, Red Pepper Flakes, Anchovy. The tuna was not the freshest in the world.  The noodles were home made, but the sauce was virtually non existent. 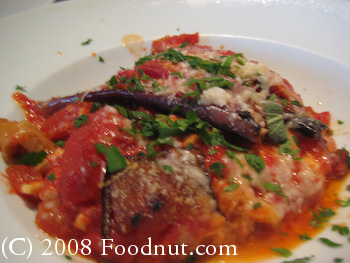 Eggplant Parmesan ($6) was a pretty good sized and tasted ok. Something with some value.

Three Sorbetti Terrine ($8) with Passionfruit Caramel Sauce was a huge fun hunk of the 3 different flavors. The grapefruit sorbet was a little bitter, while the other two were better.

Pig Special with Risotto ($30) had a roasted pig that was tender but not too appetizing.  I had pictured an juicy spit roasted piece of pig with crispy skin.  The risotto was good.  At $30, it isn’t worth it. Perhaps it is the “do not eat specials on the weekend because they are what is left over” syndrome.

Basil Mojito ($10) was sour and had a very heavy basil flavor.  The server didn’t think it would be that strong. I prefer mint mojitos or fruit ones.

The service was above average, with the waiter circling around fairly often.  The server
did seem to have to service a lot of tables.  The prices are high, at a lower price,
it would make it easier to recommend.  You see these price levels at top notch places
in San Francisco. This is the kind of place you expect to see in touristy areas, lots of
high prices, but unfortunately not top tier food. If I went back, I would stick to the cheaper items. 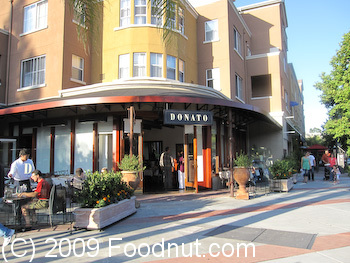