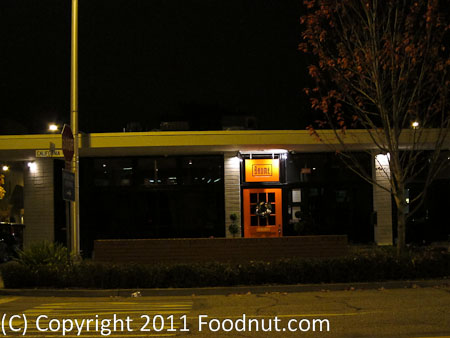 Baumé is a French Cuisine Moderne restaurant that uses a lot of molecular gastronomy techniques. The restaurant is named after the pioneering French chemist Antoine Baume. They recently received one Michelin star for 2011. Bruno Chemel was well respected at his last restaurant and also earned a Michelin star there.

Having eaten at molecular gastronomy temple The Fat Duck in the UK, we weren’t exactly looking forward to this meal but someone asked us to go! 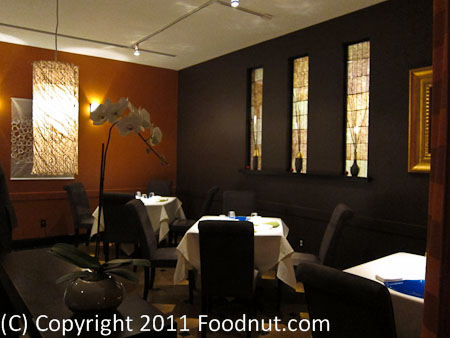 Decor, Vibe – Baume has a Zen like decor exuding tranquility with its large orange curtain room dividers, ethereal music, and orange and brown color scheme. This is a small restaurant that was fully booked for the evening. Baume has only one seating each night. Tables are refreshingly spaced far apart.

Baume is extremely expensive! Their menu includes two varying tasting menus from 8 to 12 courses, for the entire table. They discontinued their five course menu. Only ingredients are listed! Optional wine pairing.
A special $35 Alba truffle upgrade was available.

We ordered their eight course Menu Gastronomique ($118) and had a couple subtle variations in it.

Buddha’s hand cocktail was a Sake based cocktail topped off with bits of Buddha’s hand fruit chilled with liquid nitrogen. This was a Fun citrusy drink but pretty weak.

Steamed Truffle leek bun was served in an individual bamboo steamer. Soft and delicate, filled with chopped leeks. Yuzu Aoili on the side.

Course 1: Beets Coloriage on a balsamic crumb with herb de Provence dressing came with soft nodules of flavor essence and spears of goat cheese. Some nice sprinkles added a rough feel. This dish was full of different textures that mixed with each bite.

Two kinds of sliced Bread: A very nice and crispy French baguette. The other, a lemon foccaia bread was a bit more forgettable.
Two types of spreads: a mushroom butter, and a 25 year old balsamic vinegar spread emulsified with olive oil. 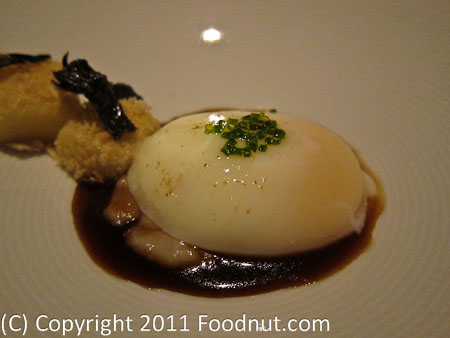 Course 3: Seared Foie Gras with vanilla braised quince and a dusting of cinnamon. Ylang Ylang, a flower from Madagascar, was used in the gelee. The small chunks of foie was cooked perfectly and was balanced out with the accompanying fruit. 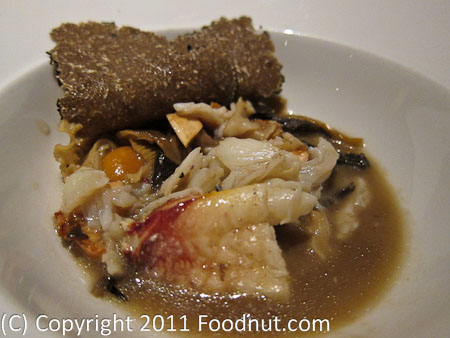 Course 4: Mushroom medley with black truffles and truffle butter. Large chunks of crab and mushrooms were hidden underneath the truffle. This dish had a healthy amount of mushrooms and strong mushroom broth. 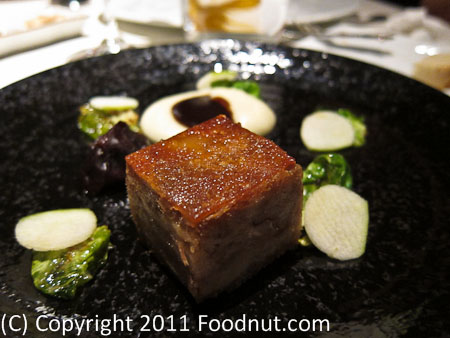 Course 6: Grass fed Filet mignon served medium rare, celery sponge, and a little bok choy was very tender and about as ‘pure’ as meat can get. No flavor from meat aging was present. Not up to the level of say Alexander’s. 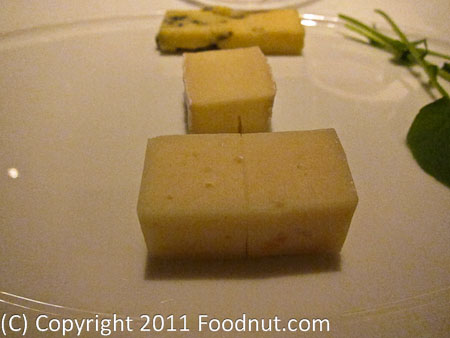 Course 7: Trois de fromages : 2 French cheeses and one California cheese with some honey tapioca pearls. The assortment of cheeses ranged from a very strong blue to a very mild cheese. We preferred the very mild but firm American cheese. The cheese was served with a Walnut and raisin toast. Some honey flavored tapioca balls were also included in this dish. The fun accent to cheese.

Intermezzo Another tiny yuzu pickled carrot, this time with a sweet walnut and raisin element underneath it.

Course 8: Chocolate Brioche dessert with espresso ice cream was the weakest dish of the night. The brownie was dry, and a spiced chocolate soup (sort of like hot chocolate) was a bit odd. The included rice cakes were pretty pedestrian.

The accompanying madeleines in a sticky orange sauce were the best part.

Rum spiced eggnog in an egg shell was a beautiful shot of heavily rum flavored goodness with lots of foam and nutmeg.

Service – Baume had excellent service. They had a ton of servers and clearly trained them to professionally and in sync. No worries about refills or napkin folding here. We did have one interesting glitch where two different people switched off on our wine orders.
Unlike servers at The French Laundry, only the waitress was well-versed in all the subtle esoterica.

Value – Prices are VERY high here, making this a special occasion restaurant. This is one of those places foodies go once to try out. The menu does rotate, so monotony wont set in on future visits.

Alternatives – Coi in San Francisco serves up stylish modern cuisine with molecular elements. Coi is more refined and has more of a vegetable slant. Nearby are Bistro Elan and Oaxacan Kitchen.

Verdict – Baume surprised us by serving up excellent inventive cuisine in the heart of the Silicon Valley. Eight courses over three hours just about filled us up, while heartier eaters should go after the 12 course meal. Prices are extremely high though, limiting access. Foodies should give this place a try. Lunch is available for those on a budget. Others might balk and say they could get larger quantities and a cheaper meal at Gary Danko.