ABC Seafood is a Chinese Cantonese restaurant with locations in Foster City and Milpitas. This review concentrates on dim sum at Foster City, which is served only during lunch. Our ABC Seafood dinner review is a separate review. We have dined at ABC multiple times with our last lunch in May 2013.

Be sure to read our Introduction to Chinese Dim Sum.

A slight step up from regular Chinese restaurant decor, with more private areas in the back. ABC Seafood has been remodeled and upgraded from the past. Lots of take out orders, families with a good blend of races were dining. 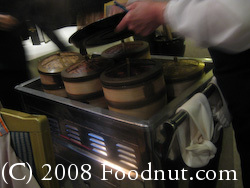 ABC Seafood is primarily a cart based dim sum restaurant although you can order from their dim sum menu.

This place is a fairly busy and noisy Chinese restaurant with lots of families and friends eating together. Pretty standard Chinese restaurant decor, nothing special.
We arrived at ABC Seafood on a Sunday 10:45am, and did not wait.  The waiting started about 11:15 or so, with a long wait at Noon. The optimal time to go is right before noon or around 1pm, as some items do not appear earlier. During peak times, some carts may empty before making it through the place. Try to sit in the areas near the kitchen, so you will get first dibs on freshly made items.

You can easily pick out Chinese Cantonese restaurants, as most have tanks of fresh fish, crustaceans.

ABC Seafood Menu pics (Click to zoom in on any picture) 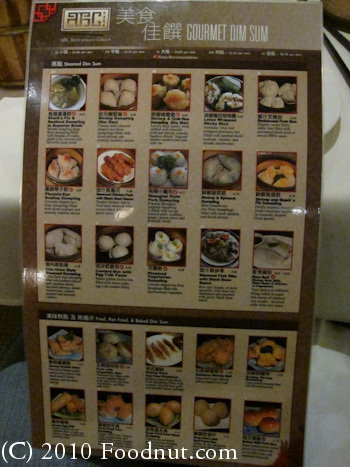 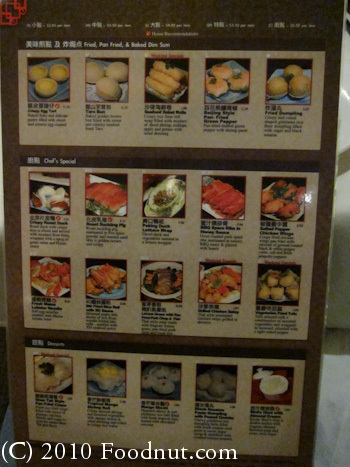 Dim Sum prices went up in 2009. They start at $2.80 for small dishes. Be sure to ask for the dim sum menu, ABC Seafood did a good job with the pictures and descriptions on it.

Phoenix Eye Scallop Dumpling ($4) crescent shaped rice flour dumplings filled with diced scallops and crunchy bamboo shoots were one of their better items. Not large, but filled with scallops. 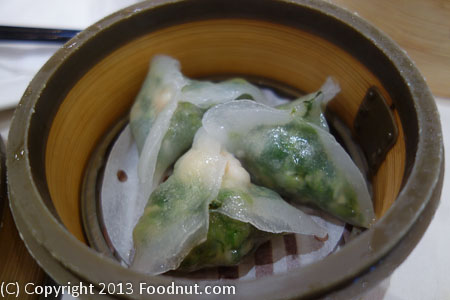 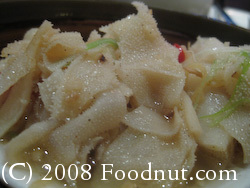 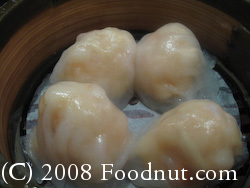 Deep Fried Taro Puff ($4) – Acquired taste, but being deep fried, it is hard to mess this up. 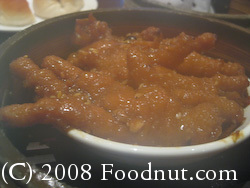 Roast Pig ($6.50) – Was fresh out of the kitchen and had crunchy skin and tender meat. On another occasion, it had been sitting out far too long.

Spinach and Shrimp Dumpling ($4) – 3 pretty big dumplings that were flavorful and full of spinach and shrimp. 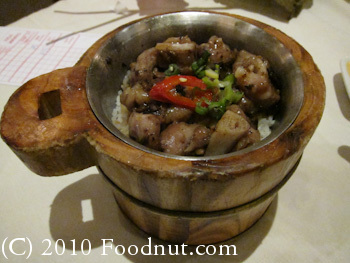 Spare ribs in rice in a bamboo steamer ($5.50) looked great and was steaming hot. Good rib flavor and infused rice flavors. Includes some peppers and a Chinese sausage. 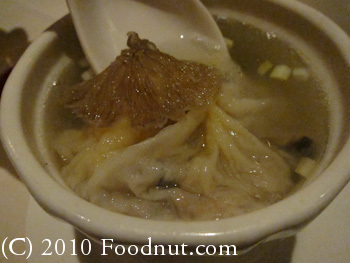 Shark’s Fin Dumpling in Broth ($5.50) must be ordered and took about 20 minutes. Fresh and hot from the kitchen with a large dumpling filled with shrimp, sharks fin, and bamboo.  Broth was on the bland side. Thankfully this item is slowly falling off their menu.

Steamed Spare ribs in Black Bean Sauce (pai gwat) ($3.50) – Had some noodles, which other places did not. Tender meat but not a lot of flavor. Not too oily or salty. It is better to order the one with rice in a bamboo steamer.

Four color Jello ($2.80) – with red bean, coconut, mango and a green flavor, this was good and not too sweet.

Steamed Chicken ($6.50) – had good quantity and included dipping sauce but didn’t have a lot of flavor or tenderness.

Shrimp Rice Noodle Roll (Shrimp Chung Fun) ($4) – Giggly, normal amount of shrimp, not oily, but not soft enough. In 2010 we found them about the same. Average, lukewarm, edible but not great. Pork version was about the same.

Sesame Balls ($2.80) – Warm, not straight out of the fryer.  Filling was not too sweet.  Pretty average, better if they are warm. Try to order these only if they are hot out of the kitchen.

Sticky Rice Wrapped in Lotus Leaf ($4) –  Warm, Decent quality and lots of filling. In 2008 they were not as good, so it has improved. Make sure you get one that has not sat for a while.

Steamed Pork Buns ($2.80) were fair as they had been sitting around for a while. On another visit, they were warm and decent, so try to send back cold ones.

Mango Pudding ($2.80) was drizzled with condensed milk and had small chunks of mango. Sweet and pretty average.

Service at ABC Seafood was a little above average for a place like this. You still have to hunt down the workers for most requests, but they did refill us and change our plates. While the food is solid here and you can’t go wrong dining here, Koi Palace, Zen Peninsula, and Asian Pearl Peninsula all have better quality dim sum.

ABC Seafood has pretty much established itself as the go-to Dim Sum place in San Mateo, Burlingame, and Foster City area.