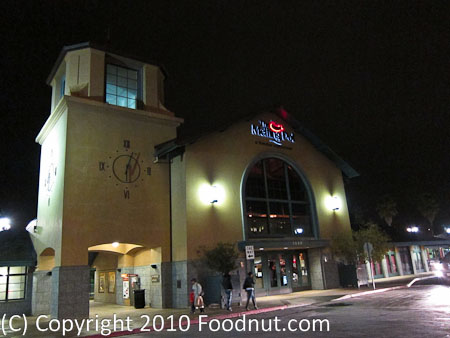 The Melting Pot is a franchised fondue restaurant that is popping up around the San Francisco Bay Area. They have over 130 locations nationwide. It brings the fondue experience into the mainstream. Our last visit was in November 2011.

We visited Melting Pot’s San Mateo location, which is located next to the Caltrain station.
There are also locations in Larkspur and San Jose. This restaurant uses induction cooktops that quickly cook up their tasty dips.

Melting Pot’s decor was clean and modern with lots of hard woods.  The booths are setup in a way to provide a good amount of privacy. Upstairs, the dining room features vaulted ceilings, and attractive track lighting with decorative pendants.

Melting Pot changes their Big Night Out menu every six months or so. The menu has three pages of food options, and many more pages of drink and wine options. Hmm, we wonder where they make their money..

If you are interest in fondue, we’d recommend dining when there is a special deal to ease the damage. Wine/champagne special Mondays has half off ANY bottle of wine or champagne. Martini Tini Tuesdays has two martinis of your choice with an order of a Big Night out. Champagne special Wednesdays has a two complimentary glasses of sparkling wine with a Big night out purchase. Wine flight Thursdays feature a wine flight with any Big night out purchase.

Sign up for their mailing list and you’ll get a free chocolate fondue for two. We used it to get $16 off our Big Night Out meal.

Big Night Out America Fondue Fusion ($92 per couple ) was available during our visit in November 2011. We choose to retain the original salads instead of the special one.  The dessert with PB and J proved to be far too sweet.  Skip it.

Big Night Out Latin America Fondue Fusion ($92 per couple ) was available during our visit in June 2011. This version included a shrimp Cerviche salad that was pretty decent.

Big Night Out France Lobster Indulgence ($99 per couple ) was available during our visit in November 2010. It was dubbed a traditional French inspired four course creation.

MAIN COURSE – Lobster Indulgence – Cold-Water Lobster Tail(s), Peppercorn-Crusted NY Strip, Chicken Provençal, Roasted-Garlic Shrimp, Maple Leaf Farms Duck a l’Orange, Ratatouille & Goat Cheese Ravioli and Fresh Vegetables was a lot of food. Most of the meats were actually pretty good quality with only the ravioli a bit mediocre. After cooking the meats, most took on the flavor of the bullion. The duck retain a little orange flavor, while the New York strip continue to be fairly peppery. Sauces include teriyaki glaze, Curry, and Ginger Plum.

Filet mignon ($32) for 9 ounces of un cooked steak. This expensive steak had some decent tender meat that cooked up juicy and tender in the Court Bouillon. We can see some enterprising college kids carrying in chopped up steak to save some bucks!

Big Night Out Fondue Fusion ($92 for 2) – You get a delicious cheese fondue for appetizer with bread, vegetables, and fruit to Dip.  Frankly, this meal is good enough for 3 people. While this meal is pretty expensive, it fully encompasses everything you need to order, and is cheaper than ordering à la carte. We ordered this on our 2008 visit.

We opted for the Spinach Artichoke Cheese Fondue with Fontina and Butterkäse cheeses,
spinach, artichoke hearts and garlic, which was a great combination.

We also had the Cheddar fondue with Aged, medium-sharp Cheddar and Emmenthaler
Swiss cheeses, lager beer, garlic and seasonings, which was not as good. The bread, vegetables, and apples were of pretty average quality. The cheese was lukewarm and should have been a lot harder.

You then move onto some average salads that were pretty small in size. The California Salad with Mixed baby salad greens, Roma tomatoes, walnuts and Gorgonzola cheese, with Raspberry Black Walnut Vinaigrette Dressing tasted the best, especially with its sweet fruity dressing. 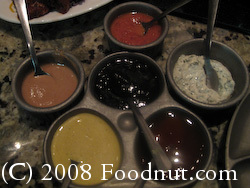 The main entrees included Filet Mignon Medallion, highly seasoned Jerk Seasoned Sirloin, Vanilla Rum Chicken, Marinated Pork Tenderloin, white shrimp, and Cold water lobster tails.  One of the biggest challenges is to figure out when your meat is done.  Using a stopwatch to count off 2 1/2 minutes was not a fun task. Ravioli cooking in one minute, while shrimp cooks in one and a half minutes.  Most people with guess-timate. After cooking the meat for a couple minutes, most of the flavor came from the broth and not the meat. Be sure to toss the lobster shell in the pot and pick at it to extract hidden meat.

Multi person Fondue – each with a different color

We opted for the ($6) Mojo Style cooking with Caribbean-seasoned bouillion with fresh garlic and the citrus flair. This broth was better than the Coq au Vin cooking style we also had. A better bet is not to pay an up charge and just get the standard Fondue Court Bouillon of homemade, season vegetable broth.

In November 2011 we had the Oil Style on a second burner and what fun it was!  Deep dry everything from steak to mushrooms to Bread!  They include 2 kinds of tempura batter.

Fresh veggies and ravioli rounded it out.  A ton of food but not outrageous quantities like a buffet. A little light on the starches, so ask for more bread.

A firey chocolate fondue with good quality and smooth chocolate was for dessert.

We tried the Cookies n’ Cream Marshmallow dream, Dark chocolate topped with
marshmallow cream, flambéed, swirled together and garnished with Oreo®
cookie crumbs. It was better than the Bananas Foster dip. On another occasion we tried The Original, their signature milk chocolate with a swirl of crunchy peanut butter. This chocolate dip was simple and also very good. On our last visit we tried the tasty Flaming Turtle with some peanut butter added.

As a nice bonus, we received a free bottle of decent sparkling wine, as it was Wednesday special.

Yin & Yang ($11) with Godiva white Chocolate liqueur was very cool looking but did not taste special.  The better bet is their Strawberry Basil Lemonade ($9).  It tastes like Strawberry slush.

Mojito ($11) was also an average drink.  Not enough mint flavor.

Mango Martini ($10) was so weak, a kid would swallow it down.

Melting Pot is fun but very expensive. You could order a la cart but most people will get the Big Night Out. Melting Pot is a fun place for special occasions and groups, it is hard to see people coming back regularly. Service was above average, with the waiter doing a fair amount of work.  On our latest visit in November 2010, service was incredibly slow leading to an extra hour of mealtime.  Things improved on our last visit in June 2011. Fairly long wine list with bottles from $26.  Kid’s plate of fondue $12 with 4 kinds of items.

If you want something more authentic and less commercial, hit the The Matterhorn Swiss Restaurant in San Francisco or Shabuway in San Mateo.