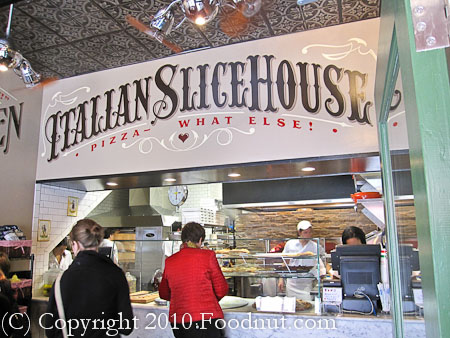 Decor, Vibe – Tony’s Coal-Fired Pizza and Slice House features the only 1,000 degree coal-fire oven in the SF Bay Area. This menu has been totally remodeled and looks very clean and modern, has a classic marble counter, several pizza ovens, and cool ceiling tiles. There is just one booth for sitting. Bring your food to nearby Washington Square, or buy a coffee at the cafe across the street. The place was busy with Tony fanboys giving the new place try.

Tony’s Coal-Fired Pizza and Slice House has wide ranging menu. They had Roman and New York style pizza slices on the counter, ready for reheating. 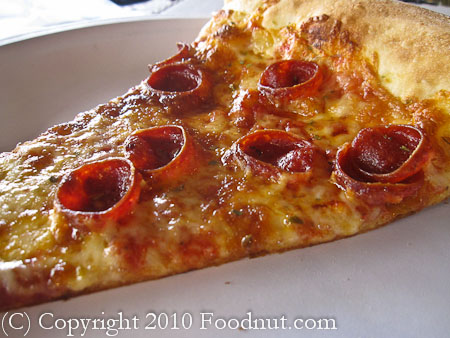 Coal Fired Pizza Original Tomato Pie w/Cheese ($19) – Pepperoni, Mushroom (+$3 each) – 15 to 16inch pie. No slices available. This is what we came for but we were disappointed by how much charring was on the top and bottom of the pizza, and the sogginess toward the middle of the pizza. Coal fired pizza is supposed to have a crisp crust with chewyness and pliability, along with the charring. Make sure you like this style of pizza before ordering. The pizza had lots of fresh tomatoes and cheese, with very good sausage and zesty pepperoni.

New York Style Special of the day ($5) consisted of meatball and dolubs of cheese.  Huge slice.

Stromboli ($7), similar to a calzone, was large, had a soft crust, and filled with lots of pepperoni. Side of tomato sauce. 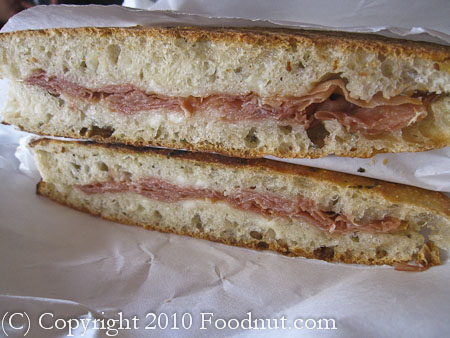 Proscuitto Panini ($7) Sliced Mozzarella, proscuitto di parma, Acme Bread (just like Italy served warm) look good and was nice and warm, but was filled with a thin layer of meat. The Acme bread was top notch as usual.

The friendly staff took our order quickly and served up our food in just a couple minutes. Tony’s Coal-Fired Pizza and Slice House tries to cater to many needs, but their strong suit remains, surprise! PIZZA. Next time we’ll try one of the other sandwiches. Hopefully there will dial in their offerings, in the near future. They add 3% for healthy San Francisco.