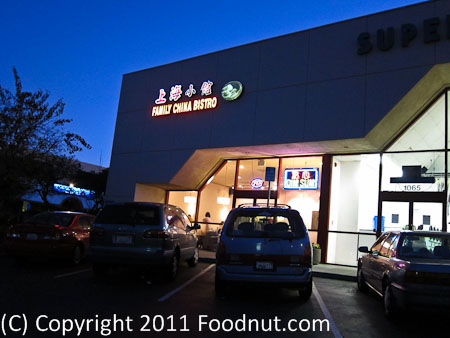 Shanghai East has moved to Millbrae from San Mateo and changed names to Shanghai Bistro. Their staff and chef are intact. Spicy Empire has taken its place in its old 25th Ave location, San Mateo. The owner took over China Bistro in San Mateo in early 2013 but closed it later that year.

Shanghai Bistro Restaurant is a Shanghainese Chinese restaurant on Millbrae’s busy El Camino Real, almost next door to McDonald’s. They have a sister restaurant in Oakland’s Chinatown. Shanghai Bistro opened in late 2010 and focuses on Shanghai Dim Sum and Noodles dishes during lunch. Our last visit was in March, 2014.

Check out the review of Jade Garden in China to see what real Shanghainese places serve. Another must visit restaurant in Shanghai, China is Fu1039. 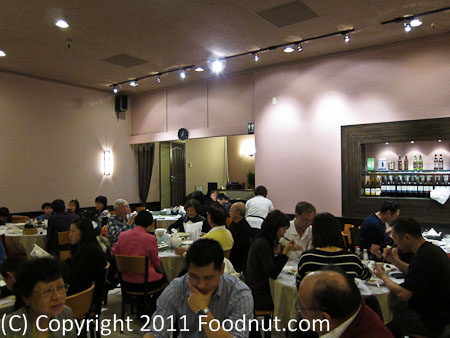 Decor, Vibe – Shanghai bistro is much bigger than their old location in San Mateo. Pink tones and large lights on the wall. Many more large tables than before. Pretty minimal decor.

Shanghai Bistro’s Restaurant Menu had lunch dim sum small plates menu, noodle dishes, as well as a traditional menu. Their dinner menu has many Classic Shanghai in Mandarin Chinese dishes. Try to stick to the Shanghai Chinese dishes and not the Americanized Chinese food. They also have Peking duck  cooked two ways, for dinner. Free delivery with minimum $30 order.

Shanghai Bistro sells their dumpling to go.  We have tried them and find them pretty good. Keep them in the freezer till you need them. 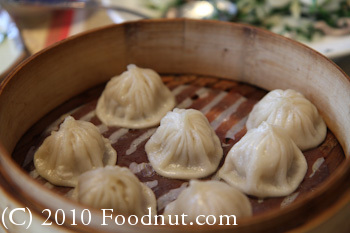 Shanghai Steamed dumplings ($5.95 for 6) or Xiao Long Bao were slightly above average. Inconsistent amount of soup inside and smallish meat filling but good flavor. Thick skin and super sized.

Places like Din Tai Fung are consistent with their small size, amount of soup, and flavors. Shanghai Dumpling Shop in Millbrae is still the better version.

Sautéed prawns with scallions Shanghai style ($8.50) was a beautiful looking dish with lots of fresh prawns covered in a sweet soy sauce. This dish was very messy, we’d recommend getting the version without shells that costs two dollars more. 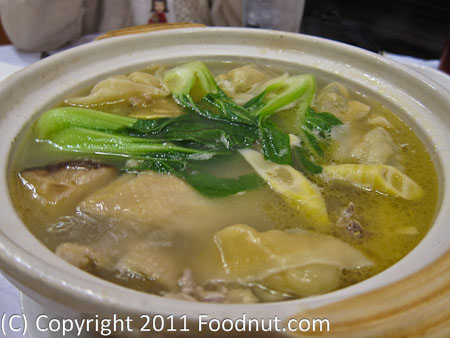 Chicken and wonton casserole ($12.50) was a huge bubbling bowl full of large wontons and roughly half a chicken. Nice long boiled chicken broth along with some bok choy, mushrooms, and bamboo shoots. 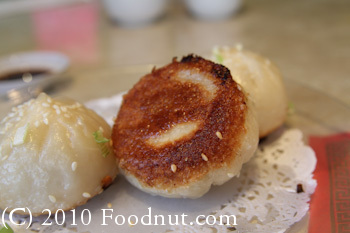 Shanghai Pan fried pork buns ($6.50 for 6) had a light brown bottoms and good skin thickness. They were hot and took a while to cool down. These should be ordered only by fans of this dish. Big meat chunks, a little bit of soup inside some buns. RIP Sunny Shanghai in San Bruno serves up the best version of these. Be sure to check out our Shanghai restaurant reviews to see how the real deal is. 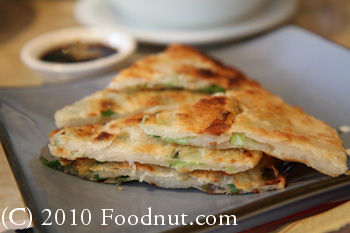 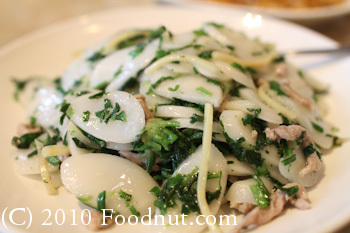 Ji Cai and Shredded pork with Rice cake ($7.50) Ji Cai vegetables are like chopped spinach mixed in with a little pork on tender rice cakes. A little different than the napa cabbage version we usually get but still solid.

Vegetable Rice with Salted pork Clay pot ($6.50 small) was very good. Finely chopped ingredients with nice flavor. One of the better ones around here.

Dry cooked string beans ($8.50) were crisp and fresh beans bundled along with a good helping of minced meat that added a salty element. 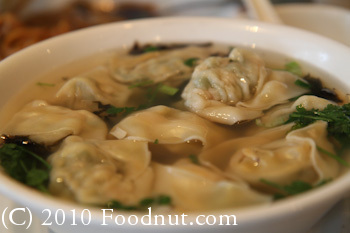 Sauteed bean curd with green vegetables ($10.50) can in a thick starchy broth but still managed to have nice veggies cooked just right. 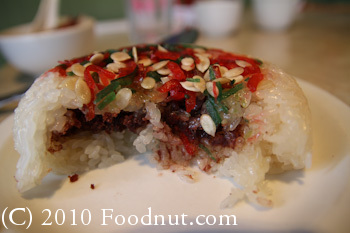 Eight treasure rice pudding ($6.50) was compact with dry topping, and a crumbly inside, but had very good flavors. This dish is available with either white or black Rice. 5 Joy still makes a better one but this terrible looking one wasn’t bad.

OK:
Shanghai chow mein ($7.50) was a reasonably sized portion of fat noodles but was fair at better. The sauce simply too sweet.

Shanghai Bistro’s service was pretty much drop and go with occasional check backs IE: typical Chinese restaurant service. The waitresses speak English so no communication worries here. Shanghai Bistro has reasonably priced Shanghai Chinese food, making it a solid bet if you want a taste of Shanghai.  Shanghai Dumpling Shop in Millbrae is also worth a visit if you like Shanghai Chinese food especially the Steamed pork dumplings.

Check out our Shanghai restaurant reviews for the real deal, Shanghai food that we have in the San Francisco Bay Area is not very close in quality.