ABC Seafood is a Chinese Cantonese restaurant with locations in Foster City and Milpitas. The Foster City location is in the shopping center that houses Safeway. This place is a fairly busy during dim sum lunch but was only 1/3 full for dinner. You can easily pick out Chinese Cantonese restaurants, as most have tanks of fresh fish, crustaceans. ABC Seafood has an extensive menu with lots of expensive items. We stuck to more normal moderately priced dishes. Our last visit was in the summer of 2015.

A slight step up from regular Chinese restaurant decor, with more private areas in the back. Lots of take out orders, families with a good blend of races were dining.

They also have this dish with a soy sauce chicken.  The crispy one is preferred.

House Special Soup of the day ($12) was dried bok choy soup with pork, orange peel, and lots of other goodies. Excellent long boiled flavor and lots of soup ingredients.

Eggplant claypot casserole ($12) was more of a Northern Chinese dish that is satisfying. Lots of sliced eggplant in a beef sauce.

Fried Squab ($12) was not as good as The Kitchen, but edible nonetheless.

Free taro tapioca dessert was a nice free highlight. Not to sweet and just the right thickness.

Ginger Chicken Clay Pot ($14) with eggplant was on the greasy side and the chicken had little flavor.

Mandarin style pork chops ($12) Sauteed savory pan fried Pork Chops and sweet yellow onion in tangy Vinegar and Tomato paste sauce were good but not exceptional. Meat was thin, lots of bones were left in, and the sauce was not thick enough. It could have used a more zesty flavor.

Dried Scallop and Egg white fried rice ($15) was expensive and tasted ok but ended up make two of three people who at it, hit the bathroom.

Service was a little above average for a place like this. You have to hunt down the workers for most requests, but they did refill us and change our plates. While the food is good, Koi Palace, Zen Peninsula, and Asian Pearl Peninsula have superior Chinese food. Dim Sum Lunch at ABC Seafood is a better bet than dinner. 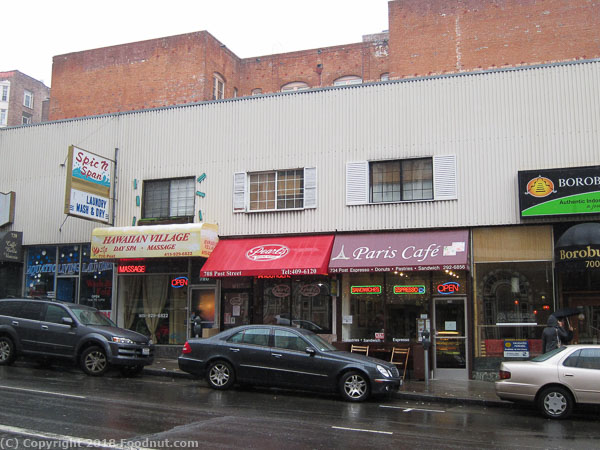