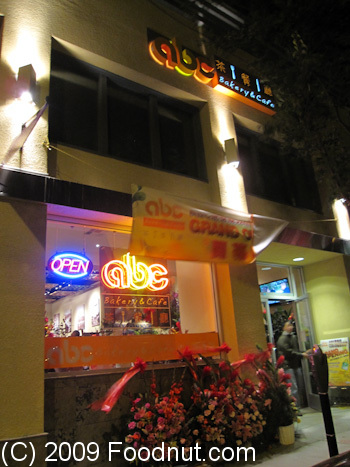 ABC Cafe is a casual Chinese eatery with two locations in San Francisco and a new one in downtown San Mateo. The parent company also owns ABC Seafood restaurants. We went to the new location about a week after it opened. They serve Hong Kong style Chinese American food. ABC Cafe is open into the wee hours of the morning. We have been here multiple times with our last visit in 2018.  They have fallen to a lousy 2.5 stars on Yelp. 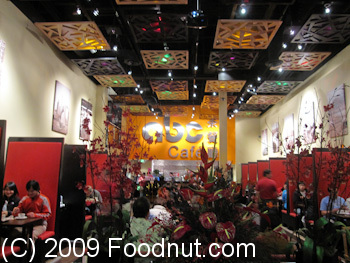 Decor, Vibe – ABC Cafe is a brand new modern restaurant with stylish red booths, big pictures on the wall, kitchen in the back. Upstairs alcove seating too. The restaurant had mostly Asian diners of all ages.

ABC Cafe Menu (Click to zoom into any picture) 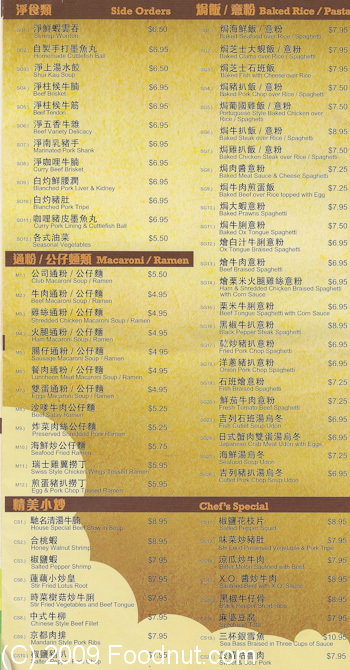 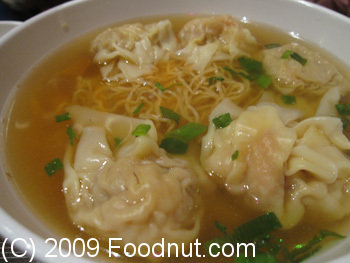 Wonton Noodle Soup ($5.75) had about six large wontons in a solid broth along with some thin egg noodles. This was a excellent classic Hong Kong style dish.

House supreme 125 Scallops Fish Soup ($9.50) with Lai Fen Rice Stick had lots of sliced fish and a ton of rice noodles. Not the highest in quality or as good as the Wonton soup, but good enough to hit the spot. A hearty meal at a good price. Gluten free too. 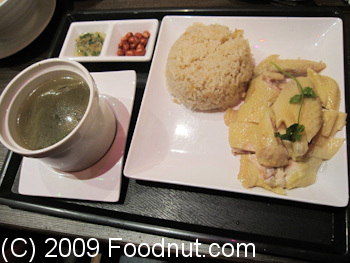 Hoi Nam Chicken Rice ($9.95) consisted of sliced chicken, chicken flavored rice, cup of bok choy soup, and some condiments. A good version of the classic, with spot on chicken and good soup. The rice could have used more flavor and more chicken would have been nice. In 2018, the price rose but the food quality of this dish was better than expected.

Removed from the menu: Special Chicken Clay Pot Rice ($9.50) took about 20 minutes, so you need to be patient. Well done and really not requiring the soy sauce that they bring you. The chicken was very tender and the mushrooms nice and soft.

Yang Chow Fried Rice was a healthy portion of very tasty and freshly fried rice with egg and veggies.

Curry Chicken with rice ($7.25) is extremely spicy but worth ordering.

Red Bean Ice with Ice Cream ($3.75) was a nice version of the classic Chinese dessert. It could have used a little more liquid, but substituting water worked just fine. 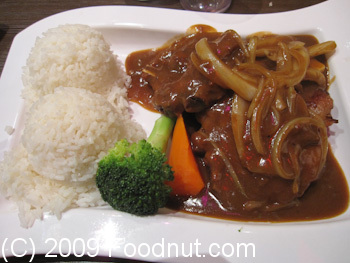 Onion Pork Chop with rice ($6.95) were three pork chops drowned in onion gray and served with two scoops of rice. Tons of meat in this dish. The gravy overwhelmed everything else, but had decent flavor at least.

Garlic Pea Shoot Vines ($8.95) were undercooked and a bit too tough.

Roast duck was average. Flavor was fairly sedate and it was pretty greasy.

ABC Cafe had terrible service as we had to hail people for everything. Service improved the next time we went. Food comes fast when the place is not loaded. The prices are very good and the quality of the food decent, making this place a good value. This restaurant is a good place if you are looking for a quick inexpensive meal, especially if it is late at night. There really are not any places nearby serving the same food, so ABC Cafe should do well.

Using your iPhone in Germany – Android Smart phones in Germany

It’s all about the salted butter 🧈