Dopo is a small Italian neighborhood restaurant in Oakland’s Piedmont Avenue shopping district. The chefs used to work at Oliveto. It is located almost across the street from Fenton’s and opened in 2004. They recently opened a sister restaurant Adesso a block away. They do not take reservation unless you have a party of 5+, so wait times can be long. We went at 5:45pm and just barely got a table. We saw them offer wine to some people waiting. 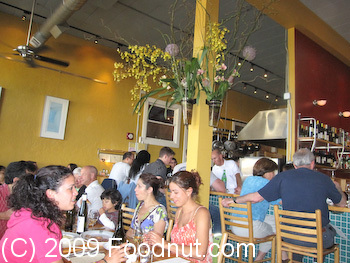 Decor, Vibe – Compact slightly cramped dining room, simple decor, lots of counter seating. Couples of tables on the sidewalk. Mostly locals in their 30’s to 50’s, along with a couple families. 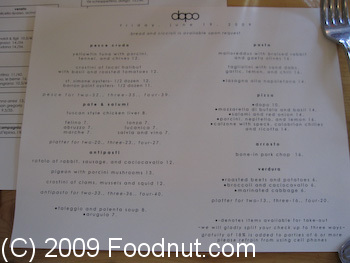 The bread comes with some interesting pork butter spread. 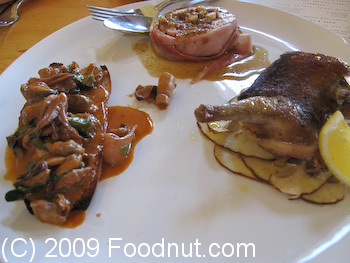 Antipasti for 2 ($20) rotolo of rabbit, sausage, and caciocavallo was complex and very meaty with a juicy blend of ingredients. Pigeon with porcini mushrooms was cooked very rare but was extremely tasty and slightly chewy due to the level of doneness. Crostini of clams, mussels, and squid was on the salty side, and had a soggy crostini, but was also very good.

Pizza ($14) Mozzarella di bufalo and basil was one of the best thin crust pizzas we have had. Very thin, very cripsy, nothing soggy. Light touch of tomato sauce and some olive oil drizzled on top. The cheese at Gialina made their pizza standout over this one. 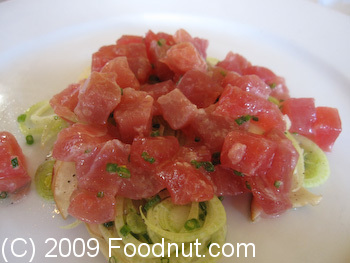 Yellowfin tuna ($12) with porcini, fennel, and chives was seen on a neighbors table and had to be ordered. Very fresh crudo with a touch of seasoning made this awesome. 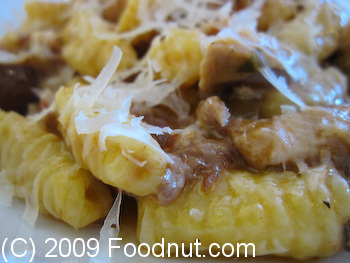 Mailoreddus pasta ($16) with braised rabbit and gaeta olives was a perfectly cooked gnocchi shapped house made pasta served with a huge portion of tender rabbit. They could have added 50% more pasta to balance out the meat.

Espresso panna Cotta ($7) looked pretty plain but was one of the best around. Very smooth without being too creamy. 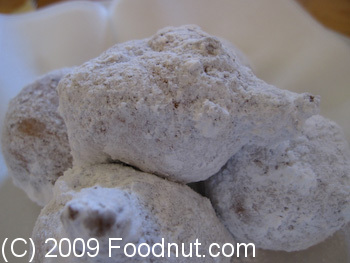 Lemon ricotta zeppole ($7) were 4 freshly fried donut holes with powered sugar on top. Hot and crispy awesomeness with a gooey center. A must get.

Apricot sorbetto ($7) was one of the best home made sorbets around. Nothing boring here. The flavor had an intense apricot flavor and captured the freshness of the fruit. 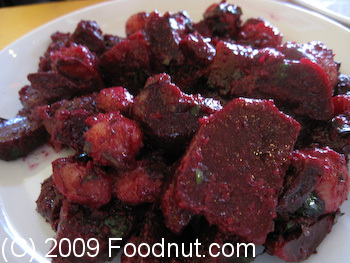 Roasted Beets and Potatoes ($6) had an overpowering beet flavor and not enough potatoes to balance it out.

Dopo had very good and friendly service with servers passing by fairly often. The prices were reasonable and food quality very high, making it a no brainer to revisit. Pizza was top notch. The desserts are especially great. It is hard to linger over a meal here because the lines are ever present. Oakland has put itself on the culinary roadmap recently with top notch restaurants like Dopo, Flora, Camino, Wood Tavern. We recently had dinner at Flour + Water in San Francisco, where the styles are similar but the food here was far superior. Dopo reminds us of Delfina in San Francisco.
Bottles of wine from a reasonable $18, glasses from $5, $8 corkage. 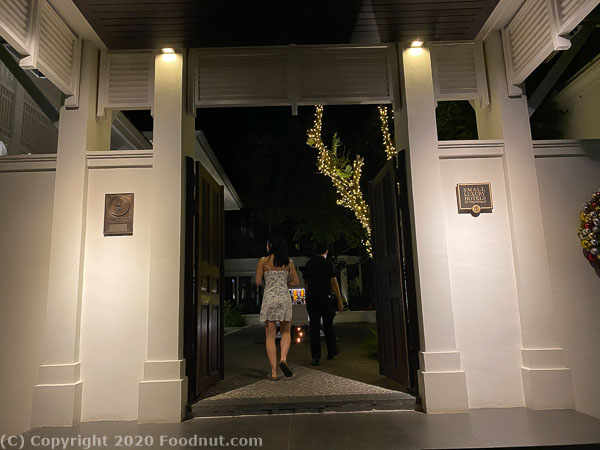