Lobster Shack focuses on bringing the New England lobster experience to the San Francisco Bay Area. It opened in 2006. They moved to strip mall in April 2016 Redwood City. They opened a location in Portola Valley in the middle of 2011. We have been to both locations. Westfield Santa Clara is their latest location.

Lobster Shack flies in the lobsters from the East Coast several times a week. Our last visit was in August 2017.

Lobster Shack has much more than lobster on the menu, seafood appetizers, BBQ, sandwiches, burgers, and seafood platters. They have BBQ’s all the time now.

Lobster Shack Menu Pictures (Click to zoom in on menu)

You order at the counter, receive a number, and wait for your order at a table. They added a cool Shirley Temple fountain drink on our last visit to the Portola Valley location. 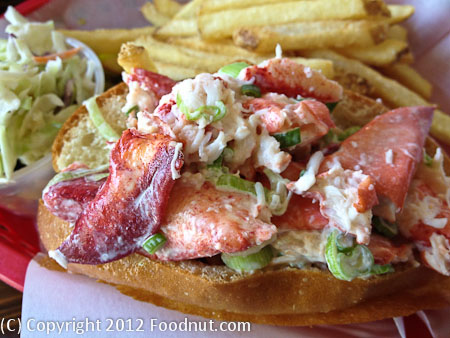 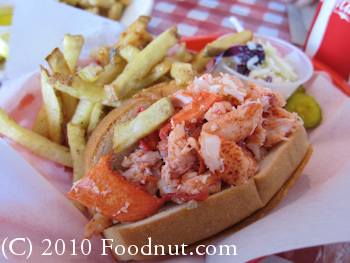 The Naked Lobster Roll ($24.75 Market price) was lobster meat on an excellent toasted roll with sides of fries, mayo, cole slaw, and drawn butter. It has massive amounts of tender but cold lobster on their specially baked nicely toasted and buttered buns. Perfect lobster flavor. Wish the Lobster Roll had a bigger bun as there was so much lobster. No need to slather mayo on this beast, as it dilutes the flavor too much.

You can order the Maine Lobster Roll ($18.75) with the mayo mixed in. They do not drench the lobster in heavy mayo. Yes it is better with the mayo, but artery clogging. 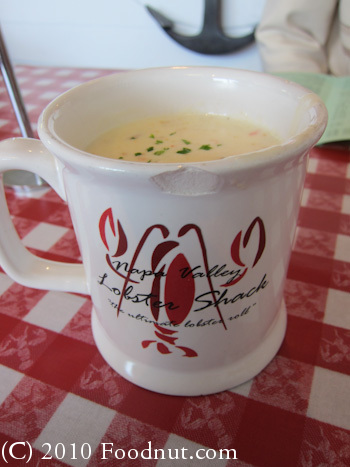 $4 upcharge during lunch adds a cup or mug of New England Clam Chowdah and a soda. The chowder was creamy and full of potatoes and clams. Pretty large mug. By itself, it costs a hefty $6.

Steamed Mussels ($14.75) in white wine and garlic herb butter was a large platter full of fresh mussels in a very nice broth. The included bread was on the greasy side, but proved to be essential in maximizing use of the awesome broth.

Steamed Maine Lobstah Dinner ($26.75) for 1 1/4 lb lobster, fries, corn on the cob, and coleslaw. Looked great and tasted even better. Messy but worth the effort. It is pretty easy getting the tail and claws off. They include a bib and instructions on how to rip it apart. Simple cooking style but why mess with a good thing? Be sure to eat the ugly guts inside the head..!

Beer Battered Fish (Haddock) and Chips ($12.75) had 3 massive freshly fried pieces of fish along with some decent fries.

BBQ on the Green – Tri Tip salad ($12.75) included a ton of beef on top of a reasonable salad with a nice raspberry dressing on the side.  Sufficient for dinner.

BBQ Combo plate ($12.75) with Tri Tip and Pulled pork, coleslaw, cornbread was pretty massive. Nice side of baked beans. Lots of very tender pulled pork and juicy tri tip.  Again decent, although the sauce was pretty average.  Pulled pork didn’t have much flavor and really needed the sauce. We got beef brisket the next time and found it better than the pork. Sweet potato fries and corn bread rounded out this dish. Mac and cheese was average. A bit bland. The combo plate was gone in 2015. Stick to the lobster.

Pans:
BBQ Brisket -Sandwich ($12.75) has gone down hill. In summer 2017 it was chopped up cubes of marginal meat and average BBQ sauce. 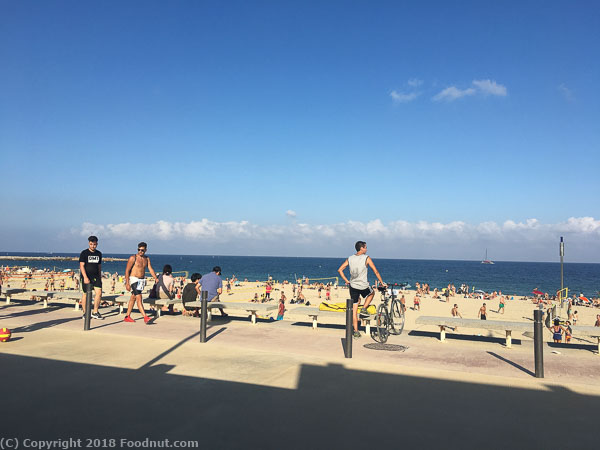