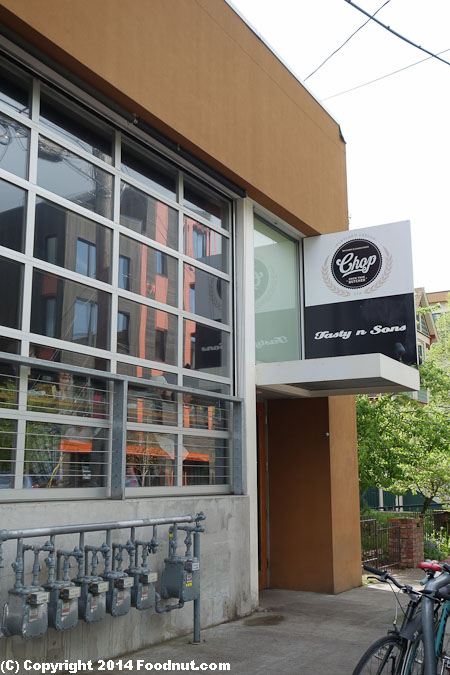 Why did we dine here? – Tasty n Sons was recommended by fellow foodies on Chowhound. We had just arrived in Portland from an early morning flight and were ready to experience Portland’s highly regarded food scene. Conveniently located, this restaurant was on the way to downtown Portland from PDX airport. This was a great first meal.

This busy restaurant is located in a modern building that houses several different small businesses including Yoga studios, bike shops, and other food shops. Tasty n Sons has high ceilings with a large open kitchen and a earthy wood decor, fitting for the Northwest. They do not take reservations for small parties, but call you when your table is ready. Coffee is served to those waiting for a table. We spent the waiting time exploring the interesting stores next door.

Insider Tip – Come early to avoid the crowds, be prepared for cocktails on weekday mornings!

Service – Tasty n Sons had a very good waitress who helped us order the signature items as well as several helpers who kept everything flowing. The service was better than expected. Food trickles out of the kitchen in a sort of a random order.

Verdict – Tasty n Sons impressed us with excellent food and service. They use top-notch ingredients, serve up hearty portions, and really know how to cook. Prices are much cheaper than comparable restaurants in the San Francisco area. We can easily see paying 30% more for similar quality food. They also run Tasty N Alder and Toro Bravo.

Erin’s Sweet Biscuits with blueberry compote & whipped cream ($6) were excellent. We were originally destined for Pine Street Biscuits, but changed our minds. These biscuits were different but proved to be tender, crisp, and hot out of the oven. This dish came with 3 cut up biscuits along with a rich portion of whip cream, and house made blueberry compote with real blueberries. We had to order more and found that it was cheaper to simply order a biscuit for $2.50.

Tasty’s Housemade Granola with rhubarb compote & sweet lebneh ($6) had a healthy portion of their home made cereal. The lebneh was sweet and tangy. I still can’t believe how cheap this was. Easily $10 plus down here. 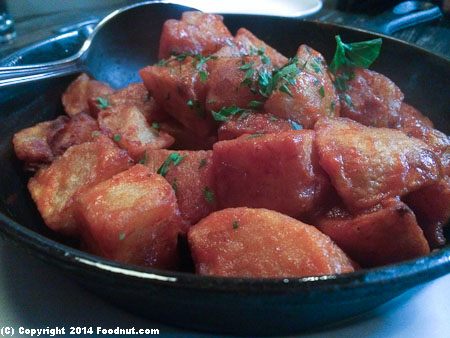 Potatoes Bravas with over easy eggs & aioli ($7) were highly recommended by our server. They are liberally covered in tomato sauce and we had them place the eggs and aioli on the side. We found this dish the weakest of the ones we ordered.

Polenta n Sausage Ragu with mozzarella & over easy egg ($9) was stellar. Some nice ground up sausage bathed in the polenta with a freshly cooked egg laying on top. A very rich dish that really needs some starch. This was a reminder of how rich and hearty many of the meals we had in Portland were. Bottega in Yountville is another great place for polenta.

Breakfast Board ($9) was amazing. All this good stuff for only $9. Labneh (strained yogurt), spicy beef jerky, bacon, beets, apples, chicken liver mousse, crostini made for an interesting and fun board filled with tasty treats. This is a great dish to share with the entire table.

The Tasty Burger with house bacon & beecher’s cheddar or smoked blue cheese ($11) was a huge burger filled with nice condiments. It came medium and was still very juicy. The fries were golden and crisp. A great way to start the day, although our burger at Lardo was superior.